Seven things to bear in mind about the Australian property market

The attached note takes a look at the upswing now underway in the Australian residential property market.

The drivers of the long-term property bull market that’s been underway since the mid 1990s may start to wane over the next 3-5 years as the long term decline in interest rates bottoms out and as the chronic undersupply of property gives way to oversupply.

After a 2.8% dip around mid-last year in response to the pandemic, average capital city home prices are rising again.

Put simply – record low mortgage rates, multiple government home buyer incentives, government income support measures, pent up demand from the lockdowns, bank mortgage payment holidays, activity associated with a desire to “escape from the city” and an emerging element of FOMO (fear of missing out) have swamped the negative impact of higher unemployment, a collapse in immigration and weak rental markets in Sydney and Melbourne. So, we are in yet another cyclical upswing in property prices. So, where to from here? But first to provide some perspective, there are seven key things worth bearing in mind regarding the Australian property market.

Second – house prices go up and down

There is no denying housing affordability is poor, debt is high and some households are suffering significant mortgage stress. But most borrowers appear to be able to service their mortgages. The share by value of housing loans on bank payment holidays has collapsed from 11% in May to just 2.4% in December. And the collapse in mortgage rates – that has seen household interest payments as a share of income fall to their lowest since the mid-1980s – has helped. 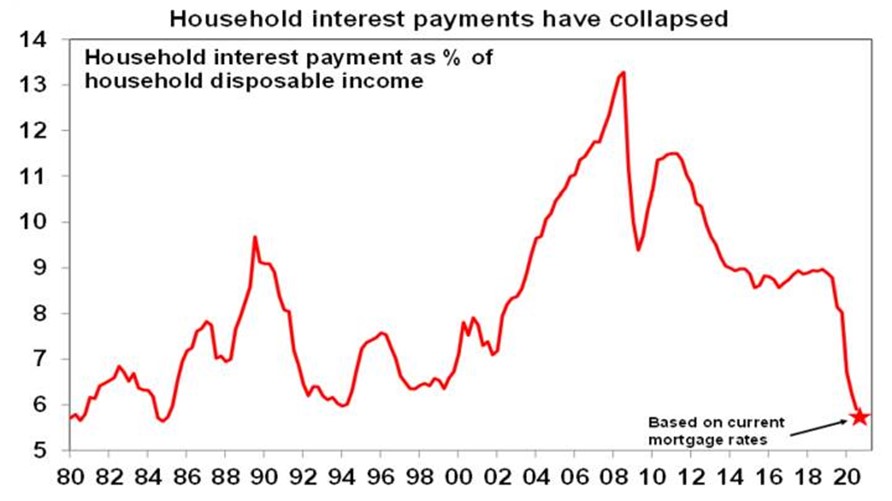 In the absence of an unexpected renewed economic downturn, it’s hard to see much rise in distressed sales. It’s also easy to see from this chart, when combined with home buyer incentives, why home borrowing and buying is surging again.

Looking back over the last 100 years, the first long term boom was in the 1920s and ended with the Depression and WW2. This was followed by the post war immigration boom that ended with high rates in the 1970s. The latest long-term boom started in the mid-1990s. The key drivers of this boom have been easier access to debt and the shift from high to low interest rates (with mortgage rates dropping from around 17% in the late 1980s to around 2-4% now) which allowed Australians to pay each other more for property and from about 15 years ago a chronic undersupply of property. The latter can be seen in the next chart. 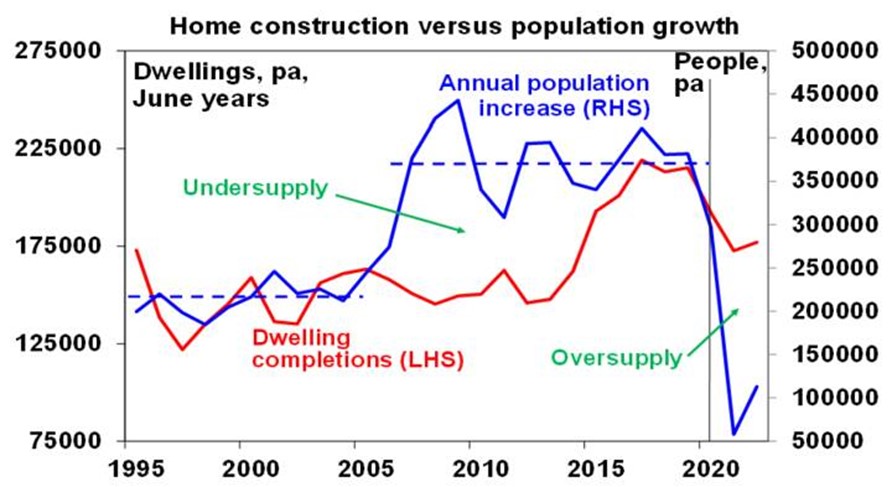 Annual population growth surged from around 2005 but the supply of dwellings did not start to catch up until around 2015, which led to a chronic undersupply of housing. This combined with low interest rates and easier access to debt explains why Australian housing went from cheap to expensive and stayed there over the last 25 years. Other countries have had low rates and tax breaks for property but far cheaper property because it’s been better supplied.

It may still have a way to go, but the two key drivers of the long-term property boom may be getting close to the end. First, interest rates are at or close to the bottom with the RBA now resorting to extreme measures to get inflation back up – which should ultimately mean higher interest rates. Second, the chronic under supply of property may be starting to fade thanks to the unit building boom since 2015, the hit to immigration and home building incentives which are likely to keep home building high for the next 12 months. As evident in the last chart, supply is likely to remain strong this year and next, but population growth has collapsed & could take years to recover. This may take some pressure off house prices on a 3-5 year view.

Sixth – “escape from the city” will have a big impact

The pandemic has seen a profound shift in how office workers do work. In particular, the work from home phenomenon is likely to remain, albeit not five days a week for all. This means less need to live close to work and a greater focus on lifestyle, which means greater demand for houses relative to units and in outer suburbs, smaller cities and regional areas.

While it’s common to refer to “the Australian property market,” in reality there is significant divergence between cities. This was clearly evident over the last decade with Sydney and Melbourne booming up until 2017, Perth and Darwin falling sharply after the mining boom and the other capital cities and regional property generally seeing modest gains. See the next chart. Right now, Perth and Darwin are only just starting to recover and there is potential for Brisbane, Adelaide, Hobart, Canberra and regional dwelling prices to play catch up to Sydney and Melbourne. The surge in immigration played a big role in the outperformance of Sydney and Melbourne into 2017 and this is now going into reverse as other cities and regional centres are benefitting from the “escape from the city” phenomenon. 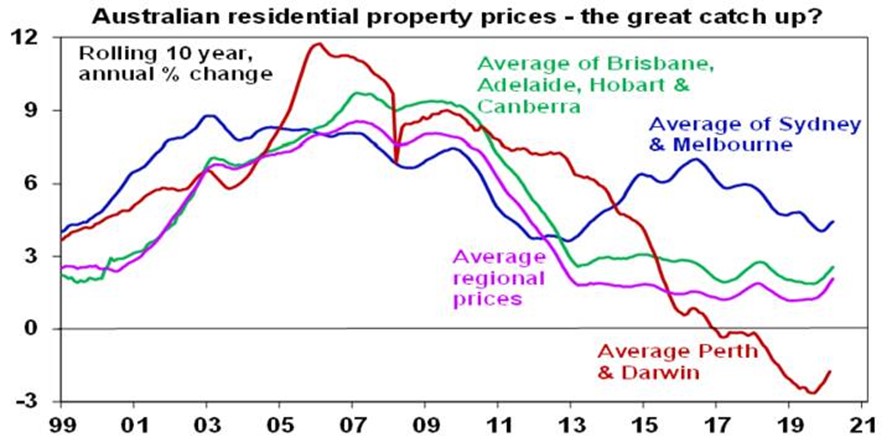 The divergence is also evident in residential vacancy rates that have been rising in Sydney and Melbourne, reflecting increased unit supply and the collapse in immigration, but falling in other cities. This in turn points to upwards pressure on rents and property values in other cities relative to Sydney & Melbourne. 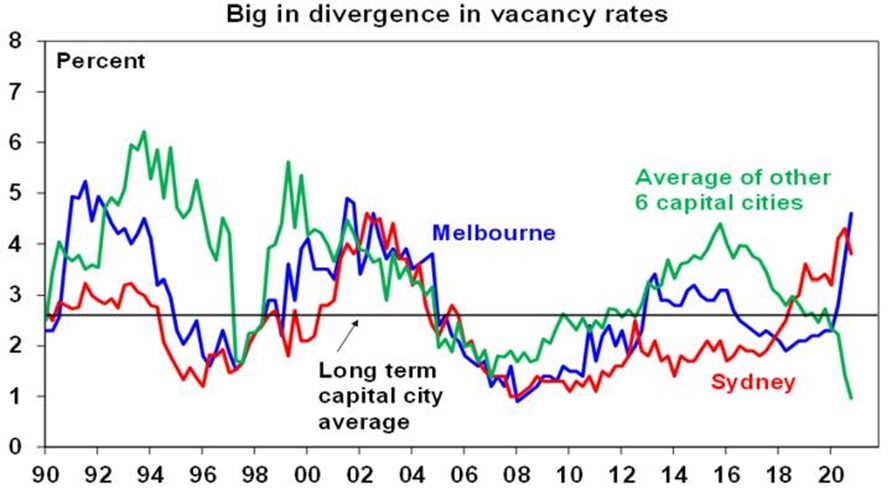 So where to now for residential property prices?

Australian home prices are likely to continue rising over the next two years thanks to record low mortgage rates and the recovery in the economy, with the latter offsetting the phasing down of income support measures and bank payment holidays. Housing finance is running around record levels and auction clearance rates are at levels consistent with strong price gains.

As a result, average capital city home prices are expected to rise by 5-10% this year and next. While first home buyer incentives are likely to be reduced, investor interest is expected to pick up and fill the gap.

However, the outlook is divergent. The hit to immigration is likely to constrain inner city Sydney and Melbourne as well as unit demand but outer suburban areas, houses, the smaller cities and regional property are all likely to see strong price gains helped along by the “escape from the city” phenomenon and less exposure to immigration. Expect average price gains of around 10% in Adelaide, Brisbane, Perth, Hobart, Canberra and Darwin in addition to regional areas.

The broader economy is unlikely to justify rate hikes until around 2023, but if the property market continues to hot up as expected, causing financial stability concerns for the RBA, a tightening in lending standards is likely next year which should start to slow things down and eventually the bottoming of the long-term interest rate cycle and the shift to oversupply may take pressure off prices, but that’s a while off yet.