Where are we in the cycle?

As investors, it is always worth doing our best to understand where we are in the economic cycle and how that might impact share prices. That determination has been made more difficult in recent years, given the amount of intervention (record low interest rate, negative rates, asset purchases, QE, etc) which has taken place globally.

In Australia, it is somewhat harder again, given that one of the key elements of the textbook definition of the economic cycle – a recession – hasn’t happened since 1991 (the technical definition of a recession being two consecutive quarters of negative growth).

For the sake of completeness, here are the four phases of the economic cycle: 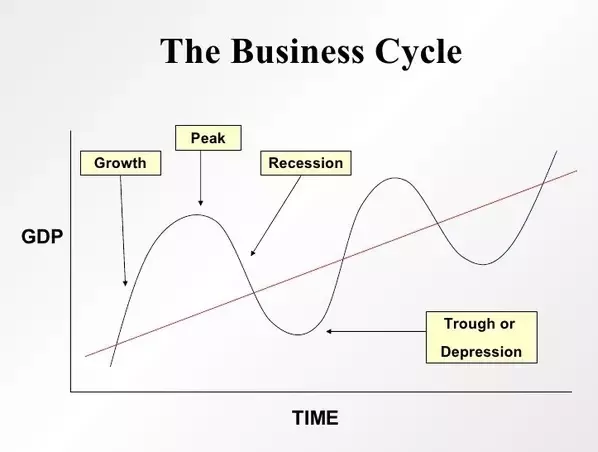 Most of the local commentary in the back half of last year was that we are ‘late-cycle’ – i.e. much closer to the contraction/trough phase of the cycle than the expansion/peak phase. The implication of such words, of course, is that a recession is not too far down the road. It’s a similar narrative in the US. And there are good enough reasons for that line of thinking. Global economic data (at least until very recently) had been deteriorating. PMI numbers were on the wane the globally, with Germany providing the canary in the coal mine – an 80-month low in their numbers. Not a great sign for the centrepiece of the EU economy. China was seen to be struggling, the US slowing and Australia suffering through a slump in our favourite asset class – property.

As always, there is another side to the argument. Investment grade credit default rates are historically low and forecast to fall. The global economy is still coming out of the worst recession since the Great Depression and has capacity that is not being utilised (slack). This is why core inflation and wages remain well below historical trend levels – a phenomenon we have seen all across the western world.

Deutsche Bank looks at seven key measures to determine where they think an economy is in the cycle – the length of the recovery; labour market and output slack; cost pressures; cyclical demand; leverage; credit default rates and lending standards; and profitability.

Five of those variables (inflation, demand, confidence, leverage and credit quality) indicate that the US economy is in the early-to-mid stage of its cycle – amazing to think since we have already seen a 10-year expansion but not unheard of. Remember, Australia hasn’t had a recession for nearly 30 years.

Deutsche goes on to point out that some of the factors that typically end a cycle are the cost pressures that limited slack in the economy generate, stretched spending, leverage, overconfidence or other excesses, and that none of these currently appear to be in place – yet.

In the last three US economic cycles, the ‘late’ phase lasted between two to four years, which implies that a US recession may not materialise until 2021 – many talking heads have been calling for a US recession as early as 2020.

Whilst this is a US-centric view, the reality is that if the US economy and stock market fall over, it will drag the Australian stockmarket lower with it. We need only look to the last quarter of last year to see how a US-centric issue (Fed funds rate and the price of money) can impact our market as well.

In that vein, the lesson remains the same: exiting your portfolio or moving to cash too early in the cycle can be extremely costly. The good thing about the economic cycle is that if we are paying attention, there is normally plenty of evidence prior to it all falling apart, so we should have enough lead time to avoid the carnage. And that’s our view at Marcus Today. We’re not inclined to make bold assertions about where we are in the cycle. Instead, we would prefer to monitor the situation diligently and then react accordingly when things change. The market risk is also managed by your asset allocation ie reduce exposure to growth assets and move more into defensive assets.3