WeWork – the most likely fallout from a disruptor interrupted

Companies like Regus and Servcorp have been around for decades offering users a serviced office product not too removed from the “flexible” or “coworking” offers we see much more of today. The rise, and more recent fall, of WeWork though has put a former mundane sector under the microscope.

All it took to elevate the beige-painted, fluorescently-lit serviced office concept to a higher plane in our collective consciousness was fresh paint, free-flowing kombucha, a charismatic CEO, and a mission statement differentiating the WeWork business model from its many “office hotel”1 peers.

As a result, the coworking movement has been tethered to the highs and lows of WeWork’s seemingly endless expansion. Until the failure of The We Company’s proposed US$47 billion2 IPO, which has now been scrapped, that is.

AREIT investors are now surveying the discrete impacts of WeWork’s current travails. Of more importance are the system-wide implications of a potential collapse. What might be the lasting effects on tenant behaviours and expectations that this and other co-working groups have spawned?

Despite the illusion of difference, WeWork’s business model was little different to that of other coworking companies; sign-up for real estate on long term leases at a rent lower than the one being charged to end users on a far shorter time frame. That’s coworking in a nutshell.

Somewhere along the way aggressive expansion, the free flow of investor capital and public pronouncements of wanting to change the world blurred the line between tech unicorn and rental arbitrageur.

Regardless of WeWork’s longevity, coworking has broadened the appeal of office premises. That’s a good thing for the markets in which we invest. Nevertheless, we must assess the likely fallout from the potential demise of this interrupted disruptor.

Dexus Group (DXS.ASX) is the country’s largest listed office landlord. Currently, it has two tenancies leased to WeWork, comprising about 0.60% of the portfolio’s total income. Both spaces are located within the tightly-held Sydney market. We are told they enjoy 90-95% utilisation3. Among the AREITs in which we invest, the discrete impact of WeWork’s potential failure is minimal.

It’s also worth noting that other major AREIT office landlords, while happy to support multiple coworking brands, have been reticent to extend any level of portfolio access to WeWork due to concerns over the group’s lower-quality start-up, sole-proprietor tenant base.

What about the Sydney and Melbourne office markets, where AREITs have the greatest exposure? The rise of coworking has been swift. The sector now accounts for 23% of all net absorption since 20164.

While WeWork has been a large component of this growth, overall coworking tenant penetration remains low in absolute terms – less than 10% even in the cities like New York and London, where coworking has really taken hold. Relative to such cities, the market penetration in Sydney and Melbourne is even less. 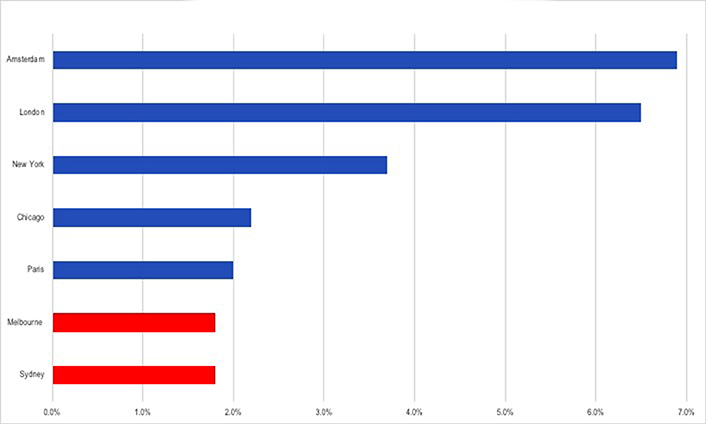 There’s another factor to consider. With near-record low levels of vacancy, available office space in Sydney and Melbourne is scarce. The conditions for releasing any pockets of suddenly-available former WeWork locations are strong. This is a worse-case scenario and one that isn’t that bad.

One potential outcome of WeWork’s failure might be existing landlords stepping in as operators of former WeWork space. Depending on the incumbent pricing of in-place deals with tenants, they might even manage to do so at a profit. Another scenario could see other global or regional coworking operators takeover WeWork locations.

Either way, the system-wide implications of WeWork withdrawing from the local office market are likely to be mitigated.

The most significant impact of WeWork’s possible failure, at least from the perspective of AREIT investors, is the lasting effects its customer-centric model might have on our returns as investors in office property.

For most of their space requirements, large corporate office tenants will continue to demand the benefits of operational certainty inherent in a long-term office lease. They are, however, increasingly looking for a flexible, coworking solution to satisfy components of their most agile and innovative operations. As a result, co-working is here to stay and – WeWork or not – may well continue to grow.

How that impacts the returns to AREIT investors depends. The removal of the certainty of income delivered by a longer-term lease agreement to occupy an office building does increase risk and uncertainty. That might flow through to the potential income returns and, ultimately, the valuation.

But it’s not quite as simple as that. As long as the AREITs in which we invest adequately price any trade-off in commercial terms for greater occupancy and higher rents, it’s more-than-likely that coworking will continue to add tremendous value to landlords and commercial property investors like us. It’s the extent of any such trade-off between income and risk that’s critical, and one we’ll be watching closely.

This article has been prepared by APN Funds Management Limited (ACN 080 674 479, AFSL No. 237500) for general information purposes only and without taking your objectives, financial situation or needs into account. You should consider these matters and read the product disclosure statement (PDS) for each of the funds described in this article in its entirety before you make an investment decision. The PDS contains important information about risks, costs and fees associated with an investment in the relevant fund. For a copy of the PDS and more details about a fund and its performance click here. To receive further updates and insights from the APN team, sign up for Review, our monthly email newsletter.