The Birth of the Stock Market

Us modern day investors can buy and sell stocks at the click of a button. We can see the price and details of any stock in the world with a quick google search and can get our rolling market fix daily through tv, radio or online news sources. But it wasn’t always like this…

As many of you already know, investing, shares and our market in general has been constantly evolving. Moving from physical slips, to phone orders – with traders all huddled in cubicles or yelling in a ring – into what we see today. But to see what it really all started as, long before you or I were even a twinkle in our father’s eyes, we need to take a little trip back in time.

Imagine this… 16th century England, Queen Elizabeth runs the place (The original Elizabeth, current day Elizabeth isn’t THAT old…) and she’s changing things up from her old man Henry XIII’s leadership style of executing everyone, to support a bit of global exploration.

The most notable of the Elizabethan seamen was Sir Francis Drake, who came to favour after circumnavigating the globe. Drake made a fortune shipping slaves, while his young nephew Sir Walter Raleigh tried to populate and settle the New World, which of course is what we now know as America.

The New World had slaves, bananas and tobacco, amongst other things, all of which didn’t exist in England. It was an early ‘tech boom’ of sorts. All you had to do was get there, buy the stuff and get back. Easy money. The only problem was actually getting there. And in the 16th century, the only way was by boat.

The early voyagers spent years putting together the capital (money) necessary to fund the voyage. To raise the capital, they would sell little pieces of paper called “contracts” offering the bearer a “share” of the profits made from selling the ship’s cargo (slaves, bananas, tobacco, etc.) upon its return.

With the money raised the voyagers would go off and buy a ship, a captain would be selected, who would then appoint officers and they would find a crew. With the team in place off they would head off over the horizon.

When we have a look at the share structure of a ship such as Sir Francis Drake’s ‘The Golden Hind’ and share ownership of a modern day company like BHP we can see the parallels, and how the foundations of the stock market came through this 16th century trade. 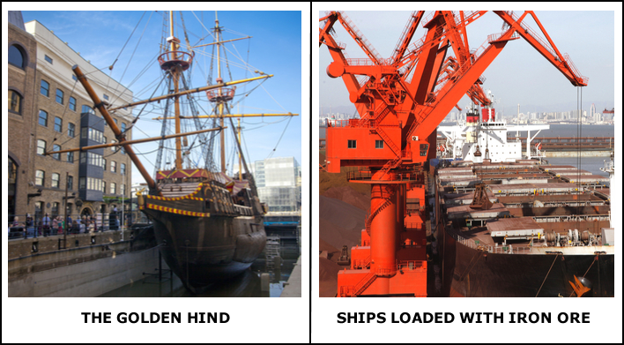 The success or otherwise of the venture firstly depended on the quality of the ship. Quality companies produce better returns. Secondly, the success depends on the skills of the Captain, or whoever is in charge. If you had Sir Francis Drake or Walter Raleigh as captain of your ship you were lucky, they were good, experienced seamen. Your shares in the ship’s cargo when it returned would be worth more. In the same way, the CEO has pedigree and has been chosen because they are a good commander. They add value to your investment.

The officers are the management. How experienced and capable they are has a big bearing on the value of your investment. Under them, the crew are the workforce. How much do they need to be paid? Will they mutiny? Will they strike? Are there too many? Should a few be thrown overboard? All questions that must be dealt with on a 16th century ship and in modern day business.

In terms of risks, they are similar whether you invested in a ship of old or BHP now. Will you sink? Will you be attacked by Pirates? Are there lots of ships doing the same thing? Do you have a monopoly on bananas? Will the government regulate prices? And what are banana, tobacco and iron ore prices doing? Will they change before you get back? Can you lock them in? Can you sell forward? All these things change the value of your share.

As we can see, the challenges we face today aren’t much different to those of the 16th century. A host of uncertainties. Very similar to today. Well maybe except for the risk of the plague or a leader being beheaded. The constant concern with ships back then, as it is with shares today is “just what is happening over the horizon?”

That sort of uncertainty might have prompted you to want to sell your share in a ship before its return. Or your circumstances might change, making you to want to realise (sell) the value of your investment before the end of the venture (return of the ship). But without a telephone or a computer to get in touch with a broker like we do today, just who would you sell it to, and where would you find them?

In 16th century London the place was the coffee houses. That’s where you would go to sell contracts which offer you a share in a ship’s cargo. But often the potential buyer wasn’t there. It wasn’t as if everyone was buzzing about in cars, or could pick up the mobile phone, so the coffee house waiters learnt a new art. “Jobbing”. The original market makers. They would buy the shares as an intermediary with the intention of selling them on when the buyer came in. Depending on the information flow in the meantime they might be able to make a little something for their troubles. Keeping them a smidge more comfortable than cappuccinos alone would have.

Fast forward a few years to 1698 and a list of stock and commodity prices was posted at Jonathan’s Coffee House in London in Change Alley (now Exchange Alley) on the original site of the London Stock Exchange.

And so was born the stock exchange, with the coffee waiters to thank as the first stockjobbers (price makers). 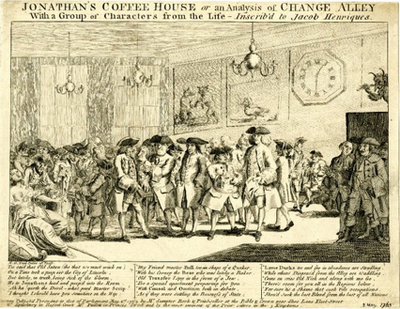 The guards that patrol the London Stock Exchange to this day still wear the same blue tunics with red lapels worn by the first waiters in the London coffee houses.