The February reporting season was, on balance, better than many had anticipated. Australian companies delivered more earnings beats than misses. The primary winners were those able to deliver organic growth, as opposed to prior reporting seasons where companies exceeded expectations through cost-out programs.

Though the market finished broadly flat for the month, with the ASX200 up only 0.36%, the February reporting season was both an active manager’s dream and nightmare. 36% of ASX200 companies delivered upgrades while 34% suffered downgrades; this represented the largest positive difference since 2010. The strong corporate earnings season, increasing company capital expenditure expectations and higher organic growth, suggests the broader economy is witnessing the beginning of an acceleration in growth.

Below we highlight the best and worst performers over the reporting season.

Behind this top-line result were several noteworthy market trends which are summarised below, and expanded on later in the piece.

Following a sell-off in global equity markets early in February, the domestic reporting season moved into focus for Australian investors. Reporting seasons are always an exciting time of year for active managers, as the sheer quantity of new information entering the market means dispersion in prices is at its highest. This creates more opportunities for an active manager to exceed the benchmark. Chart 2 shows dispersion in price performance spiked considerably above typical levels; active managers making the right calls amidst such dispersion can generate significant outperformance.

Chart 2: Levels of market price dispersion across the February reporting season for the ASX300 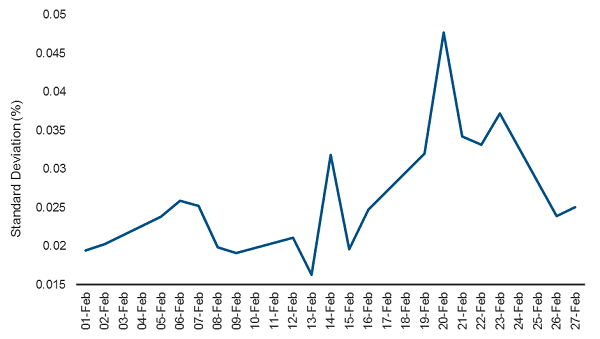 Our investment approach looks to identify cheap, good quality companies, with strong momentum. Examples of these movements and our analysis are explored below:

The market also continued its rotation out of rate-sensitive yield names as investors contemplated the impact of rising interest rates globally. Despite in-line results from Telstra, Transurban and Sydney Airport, such yield-based stocks broadly underperformed this reporting season. This contrasts with the success of offshore earners, particularly those with exposure to the US. Companies in the healthcare and construction industries were the highlights; CSL, Boral, Reliance Worldwide and James Hardie each observed growth in revenues largely driven by organic US earnings growth.

Capital management was very much on the agenda this reporting season, with $500 million of dividend upgrades and over $1.7 billion in announced share buybacks, most notably by Lend Lease (up to $500 million), Dexus (up to 5% of issued securities), and Qantas (up to $378 million).

The market also remains in a capital expenditure upgrade cycle, impacting all sectors apart from consumer staples, which has seen a slight fall in investment expectations. Overall, expectations increased by 0.4% for June 2018. This increasing spend on business investment supports our view the domestic economy has turned a corner, and domestic growth will continue to improve over coming years.

There are, in our view, many reasons for optimism coming out of this reporting season. Earnings beats outnumbered misses, company capital expenditure expectations are increasing, and organic growth was a feature broadly. However, as small cap variation and the rotation away from yield demonstrate, the characteristics of quality stocks evolve over time, and it remains vital for outperformance to correctly analyse trends within the market; we continue to believe we at Macquarie Investment Management can achieve this outperformance.