Focusing on Future Quality through the noise

By the end of last year it looked like a combination of central bank policy error and political uncertainty was about to end a decade-long bull market in global equities. That combination was certainly enough to stop Santa delivering his traditional year-end rally in 2018. As we approach the end of 2019, this year things are looking rosier and cautious optimism is on the rise.

Although economic data have remained relatively soft (particularly excepting the US consumer), there have been indicators of potential improvement ahead and the rate of deterioration has slowed markedly. Most importantly, the US Federal Reserve has resumed its balance sheet expansion, cut rates and assumed a much more dovish tone generally. Political pressure on the current Fed has reached extreme levels this year, courtesy of President Trump’s Twitter feed. The heat was also turned up by the US yield curve inverting in June. As shown below, this has tended to be a pretty accurate early warning of pending US recessions. It is difficult to know if the recent return to more expansionary monetary policy represents the Fed bowing to political pressure or a belated recognition of its policy error in tightening too much in 2018. Irrespective of the motivation, these moves have restored investor confidence that the Fed is fully invested in supporting asset prices.

Chart 1: Inversions of the yield curve and US recessions 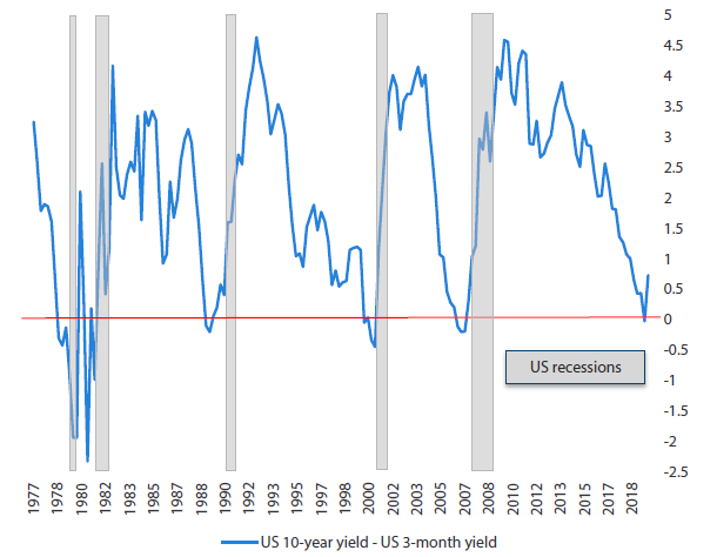 Politics generally have been a consistent source of investor anxiety this year. Here too, however, it feels like imminent meetings with the ballot box are focusing minds, suggesting at least a moderation of risk. For instance, President Trump has apparently re-read his 1987 book “The Art of the Deal”, where he stated that “you can do wonderful promotion and get all kinds of press…but if you don’t deliver the goods, people will eventually catch on”. Escalating the trade war with China initially played well with his core supporters, but December’s tariffs threatened to inflate costs on US High Streets. Meanwhile, US farmers have already been hurt by a collapse in exports to China. With 2020’s presidential election less than a year away, the pressure to “deliver the goods” is definitely building.

The rumoured de-escalation and substantial Chinese purchases of US agricultural products would certainly represent a delivery of some of the goods. The fact that the pending deal is referred to as the “mini deal” or “Phase 1” just confirms, however, that substantial ground remains to be covered if the US and China are to meaningfully resolve their differences. It feels like the pressure of the electoral clock has triggered a more conciliatory approach from President Trump. Next November’s election will give the incoming president four years to agree on any potential “Phase 2” deal. We don’t think a deal will be easy and would not be surprised to see a re-run of some of this summer’s market concerns.

Investment style rotated very swiftly when the Fed changed tack (as shown below), leading to strong performance of traditional “value” sectors such as financials, industrials, materials and parts of consumer discretionary. This has subsequently stalled but could recur if and when the US and China actually sign a trade deal. The sustainability of any such rotation will likely depend on the ability of such a deal to produce a meaningful upturn in corporate capital spending. 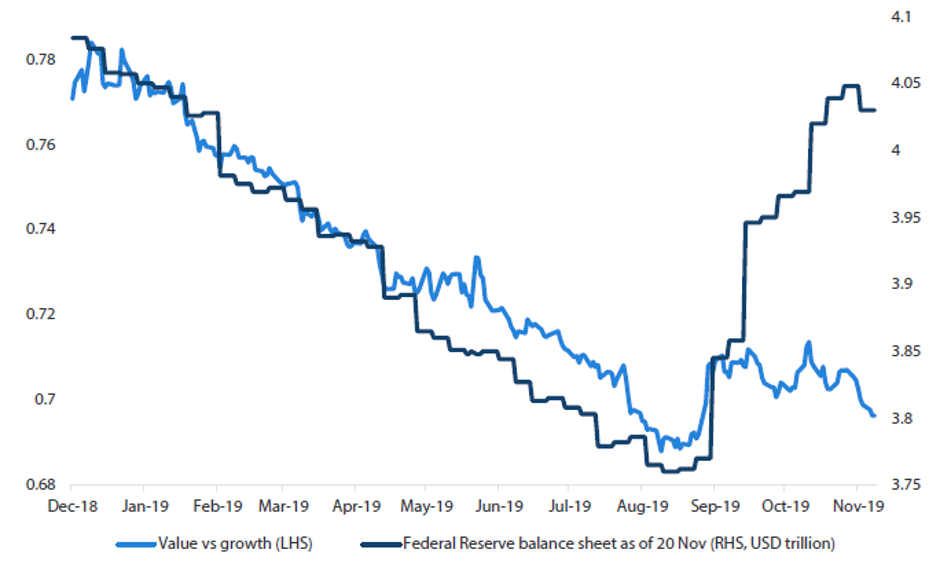 Whilst we monitor these macro issues, our focus remains solely upon businesses that can sustain high cash returns on investment in the long term. We are looking for businesses with a material competitive edge and where management is continuing to invest heavily to maintain it. We find these Future Quality companies in most sectors of the market—even those cyclical sectors noted above. One good example of such a business is Gentex, which was recently added to the portfolio. It has a 90% share of the market in auto-dimmable mirrors for cars and invests 6% of its sales revenue in research and development. Top-down fears over the health of the automotive market had compressed its valuation, creating an attractive entry point into the stock.

Sentiment towards the healthcare sector remains sensitive to political newsflow. The sector has staged something of a recovery recently as investors speculated that some of the more aggressive Democrat-led proposals to restructure the industry in the US looked less likely to occur, as the cost of implementing these changes became clearer.

We have no doubt that the US needs to act to contain its healthcare spending and we continue to position the portfolio accordingly with holdings in Anthem, ResMed, Philips and LHC Group. Despite the very real pressure on spending, the US remains a dominant player in global healthcare research and development, and US consumers continue to demand the best and newest treatments. We continue to find new Future Quality opportunities in businesses that support this innovation. The recent addition of Bio-Techne is a good example. Its technologies in protein analysis will be critical to the success of new treatment options like cell and gene therapy.

In conclusion, market sentiment remains fickle and liable to frequent change driven by the political calendar and short-term measures of macroeconomic activity. Thanks to our focus on sustainable Future Quality we did not react to fears of recession in the summer and have not subsequently changed much in the portfolio now that these fears look misplaced.