The attached note takes a look at the Australian Government’s 2021-22 Budget.

The 2021-22 Budget sees the Government ditch its plan to start budget repair (or austerity) once unemployment is “comfortably below 6%” in favour of continuing to focus on growing the economy to drive full employment and, in doing so, repair the budget that way. As a result, the Budget provides more stimulus and, thanks to the stronger economic recovery and high iron ore prices, is still able to report a declining deficit. This may seem like having your cake and eating it too – but it was also a feature of the budgets in the pre-GFC years and makes sense as reverting to austerity would delay the return to full employment and decent wages growth.

The key Budget measures are:

Total direct stimulus to the economy since pre-covid (both spent and projected to be spent) is now around $350bn.

The Government’s revised budget projections are shown in the next table. The boost to revenue and savings in spending from the faster than expected economic rebound, alongside higher iron ore prices, is estimated to have reduced the budget deficit since the Mid-Year Economic and Fiscal Outlook last December by $40bn for this financial year with smaller improvements in future years (see the line called “parameter changes”). The 2020-21 budget deficit will still be the biggest as a share of GDP since 1946, but at 7.8% of GDP at least it’s well down from the 11% projected in last October’s budget. New stimulus measures since MYEFO are shown in the line labelled “New stimulus”. It amounts to $18bn in 2021-22 rising to $29bn by 2023-24. As a result of the extra stimulus more than outweighing the windfall from the stronger economy the budget deficit profile for the next four years is on balance a bit worse than previously projected although the trend is still down.

Over the forward estimates to 2025 the deficit is still projected to fall rapidly as support programs phase down & the economy expands. This will see spending as a share of GDP fall from 32% this financial year to 28% next financial year. This has mostly already happened with the end of JobKeeper in March. 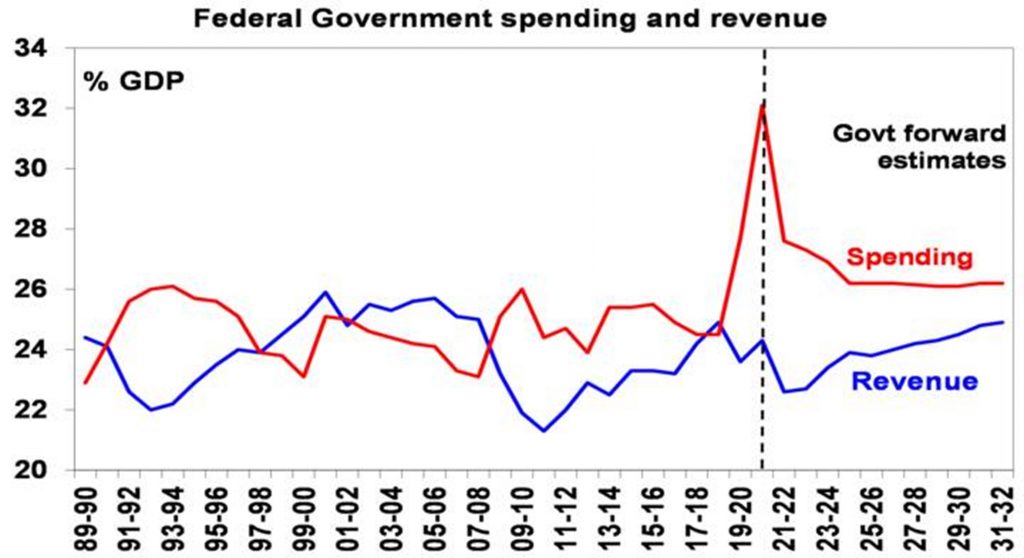 The Government is not expecting a return to surplus in the next decade – and given the commitment to cap tax revenue at 23.9% this is likely to require spending cuts at some point. 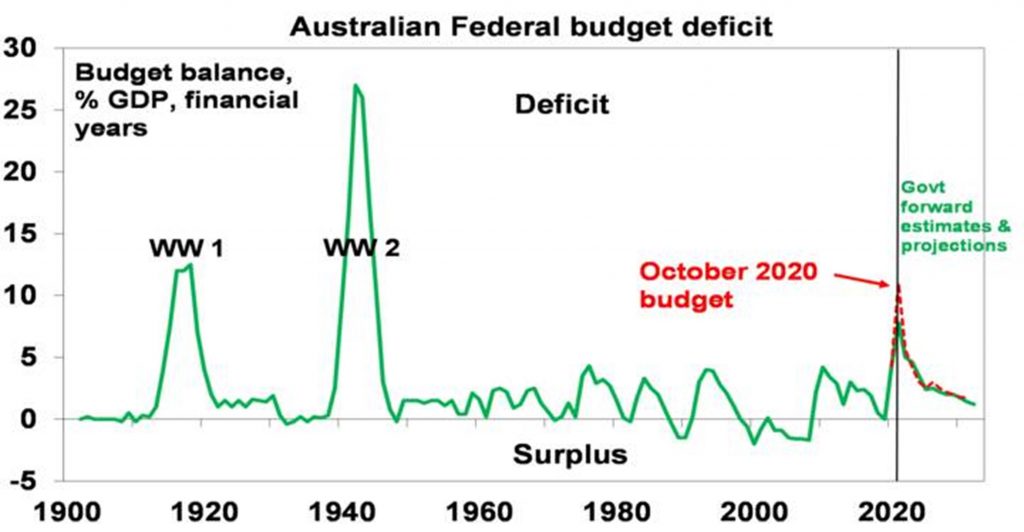 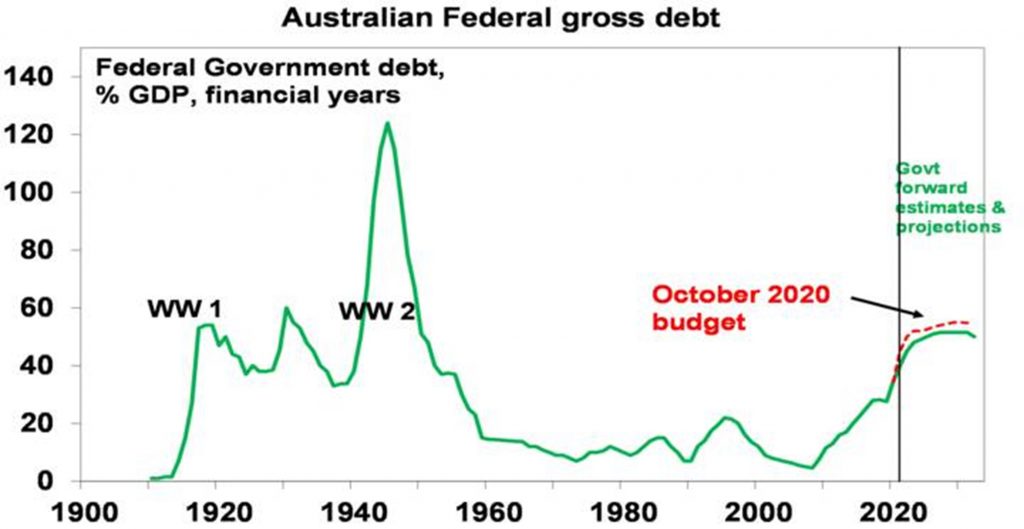 Economic growth will help ease the debt burden but – in the absence of a post-WW2 style population and immigration boom – it’s unlikely to be anywhere near enough to achieve anything like the rapid post-WW2 decline seen in the debt to GDP ratio.

At a micro level the Budget may be criticised on the grounds that: more money is likely still needed for aged care and childcare; the extra infrastructure spending is still not enough; there is not a lot of productivity enhancing reforms; and the housing measures continue to focus more on boosting demand rather than supply which will result in higher prices & more debt. In terms of housing, a preferable approach would be to focus far more on boosting supply and to take advantage of the opportunities provided by the work from home phenomenon to encourage more to move to more affordable regions while at the same time making sure increased regional demand is matched by more supply. Reducing some of the buying power of investors by reducing the capital gains tax discount (not likely!) could also help free up space for first home buyer and single parent incentives.

But at a macro level it’s hard to fault the Government’s overall strategy since the pandemic began. Our assessment remains that the blow out in the budget deficit to support the economy through the pandemic was necessary and we are now seeing the benefit of the Government’s strategy in that its enabling the economy and jobs to rebound far faster than is normally the case after recessions. This, in turn along with windfall corporate tax revenue flowing from much higher than expected iron ore prices, is helping to improve the budget deficit (and we suspect will do so at a faster rate than the Government is projecting). It’s also worth noting that Australia’s level of net debt remains low compared to other developed countries. While bond yields have increased, debt interest costs remain very low making high debt more sustainable and most of the support programs were temporary and targeted and so, are rightly ending as the need for them declines. In terms of the latter, it made sense for JobKeeper to end as the jobs market has recovered, and its ending does not appear to have caused a major problem.

Likewise, it makes sense for the Government to remain focussed on growing the economy. We are still a long way from full employment, which could be at a 4% unemployment rate or below, particularly when high underemployment is allowed for. Reverting quickly to fiscal austerity would just put all the pressure back on the RBA at a time when it has few levers to pull – and delay the return to full employment and decent wages growth. Which would risk heightened social tensions.

Cash and term deposits – with the cash rate likely remain at 0.1%, cash & bank deposit returns will stay low for a long time.

Bonds – still low bond yields combined with a rising trend in yields as the economy recovers resulting in capital loss mean that medium-term bond returns are likely to be low.

Shares – ongoing fiscal stimulus, strong growth and low rates all remain supportive of Australian shares, notwithstanding the high risk of a short-term correction.

Property – more home buyer incentives along with low rates & economic recovery will likely see house prices rise further this year and next although the pace of increase is likely to slow.

The $A – ongoing fiscal stimulus, rising commodity prices and a declining $US point to more upside for the $A.

“[Pinnacle Wealth Management] always provides an excellent service. [My adviser] has provided outstanding support to my two daughters and I since the death of my husband in August 2020. I would be happy to recommend this service to others.”
Margaret NRetired
“We have been clients of [Pinnacle Wealth Management] since the inception of the business, about 20 years ago. Overall, we have been very pleased with the long-term handling of our financial affairs, the financial strategy implemented and the regular reviews to make sure we remain on track to achieve our goals. This includes regular informative communications. It has been great to receive sound advice and personalised service, tailored to our needs, covering many different tasks. When an emergency occurred, the excellent and swift service we received from the [staff at Pinnacle] was greatly appreciated. We wholeheartedly recommend [Pinnacle Wealth Management]."
Kelvin & Melanie T Consultant in Project Collaboration, Economic, Community & Education Development
“We are long term friends of [Pinnacle Wealth Management] having been clients since its inception. We have appreciated the professional advice and also the care and friendliness of [our adviser] and staff.
Ian WRetired
“The Pinnacle team has guided the management of our financial circumstances for over 20 years, successfully navigating at least 3 significant economic cycles. Services have been rendered with total integrity and focus on our personal aspirations. During this time we have greatly appreciated the extension of [Pinnacle Wealth Management] resources to assist a number of family members responding to particular situations along their personal lives’ journeys."
Trevor & Carol IConsultants
“A friend recommended Pinnacle Wealth Management to me, having worked with them on his mother's behalf for many years. I'm so grateful to him - my Financial Advisor is brilliant, totally approachable, not as I'd imagined! I now have much greater clarity about financial management and greater peace of mind. For my money, they're the best financial planners in Adelaide.”
Jackie HCommunications Consultant
“[Pinnacle Wealth Management] is indispensable to my financial planning and day-to-day financial/life management. [My Financial Advisor] knows I have high expectations. His and Pinnacle’s response has been to continually exceed them... I would recommend  the Pinnacle team to almost anyone – anyone, that is, who is really serious about knocking their financial management and future life planning into shape."
Adrian DConciliator
"We have been Pinnacle clients for many years and have always found their advice to be considered and relevant. The administration team is professional, courteous and timely. No hesitation in recommending the Pinnacle Team"
Damien WRetired Head of Commercial Banking
"[Pinnacle Wealth Management], who most importantly created a sound financial future for our comfortable retirement, go way beyond being a financial advisor, providing support to us and our children, as their needs have changed, at a strongly personable level. Their client focus is exemplary."
Barry TRetired Accountant
We have been clients at [Pinnacle Wealth Management] for about 20 years. It has been a very enjoyable and profitable time for us. We have been safely steered through the GFC, both our retirements and various other major events that have shaped the nature of financial planning in our world. Through the entire time we have been delighted with the care and careful management of our funds through the leadership of [our adviser] and the friendly and efficient support of all the ancillary staff. [Our adviser} has become a personal friend as well as the person whom we trust implicitly to handle our portfolio and to give us sage and pertinent advice on many areas of our concern. We will miss his presence but we are sure that he has chosen well with our [new adviser], and we look forward to forging a similar relationship with him."
Ray & Lyn HRetired
“My association with [my Adviser] began quite some years ago, initially through a different company and then [Pinnacle Wealth Management]... it was driven by a need to diversify from “bricks and mortar” by growing my Plan with Australian and international equities. This wealth creation plan was created to see myself and our family, through time, to a self-retiree status. [My Adviser] has the qualifications, but his experience and guidance have been the founding safeguard for us throughout the varying market conditions. His expertise throughout these years has helped us in achieving our goals along with our family needs. [My Adviser] has provided the innovative and tailored strategy to achieve what is our endgame”
Tony SMaintenance Worker
Previous
Next
Book a free consultation
Menu