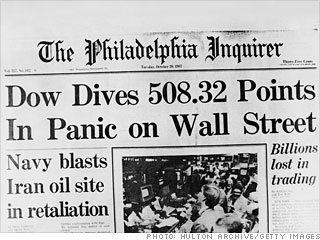 It’s the 2017 thirty year anniversary of the 1987 crash. Everybody’s reminiscing. Coincidentally I too have found myself writing about stock-market bubbles in the last couple of weeks. Nothing to do with superstition. Superstition counts for nothing in the stock market. The bubble chatter is to do with the US market which is hitting record highs repeatedly and has seen share prices outstrip earnings by 27% since the beginning of 2015. On a price-earnings ratio of twenty-three times it’s certainly not cheap and with an unpredictable muppet like Trump in charge the narrative could very quickly flick to ineffective president, North Korean geopolitical risk, and an overpriced technology sector. The NASDAQ includes $10.4 billion worth of stock, trading on an average PE of 26.5x. The market is an animal not a science and we are in a position where the US could change mood quickly. The thinner the air gets, which it does at altitude, the easier it is to collapse.

I was in London in 1987, in October, during ‘The Crash’, I was on the institutional desk of one of the big brokers. We still look back and wonder why it happened. There were a string of reasons in hindsight. The Big Bang. The introduction of computer trading. Or just an extreme moment for ‘the herd’ which is bound to happen once or twice in a lifetime. Even now you can’t really put your finger on it. There is no one cause for these things, just a myriad of reasons and a confluence of unrelated factors that start a process that becomes a crash.

If a waterfall starts with one drop, then in 1987 in the UK, the first drop (for us) was a young dealer having a record day, his biggest day of commission ever, bigger than big. A million pound order was big in those days. He did 100 million.

The head of sales shouted us all pints of Pimms down the Mithras Bar after work. We got home pretty raggedy that night. The next day we were on parade early as always. Those are the rules after a big night. We heard about one of our number doing rolling break falls down the carriages of the tube at 6 AM. Hilarious stuff. A reflection of success. 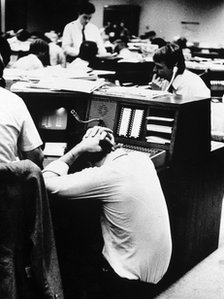 The next day we waited for the bell. Yes they rang a bell to mark the opening of the stock-market in those days. Another big day perhaps. Another big day it was. The selling was just as big. Bigger. Hundreds of red tickets. The reaction turned from “Great!” to “Peculiar?”

The top brass got visibly nervous. The selling was out of the ordinary. The institution doing the selling didn’t seem to care about price, just execution. Maybe this was a “rogue” fund manager. They rang around. It turned out we weren’t the only broker doing their business. This massive US institution was selling through anyone that could get them liquidity. The UK branch was under orders from their US office. Sell. Day three turned up. Still going. The buzz in the Mithras bar went from “well done” to “get out of the market”.

That was the first drop for us. Big institutional selling. The old hands spotted it on day one. They sold everything they had in their own accounts then got on the phones to the other institutional clients and advised them to do the same. They saw the makings of a cliff. They injected urgency. No time to think. It’s a race. Act now. Lemming herders. The “Crash” was still two weeks away (important point – the US market fell 10.3% in the three days ahead of falling 22% in a day – there were signals flashing).

Oh…and the Mithras Bar was later declared insolvent and was dissolved.

The message when it comes to a crash is that you can’t work it out on paper but the most obvious comment when detecting the risk of a bubble is that it starts with a huge rise beforehand. This is the chart of the FTSE 100 index (the UK market) in the 10 years spanning the 1987 Crash. In the year ahead of the Crash from October 1986, the UK market went up 59.6%. Repeat…59.6%. When the average stock market return over the long term is 5.75% plus dividends, in hindsight, it was always coming. 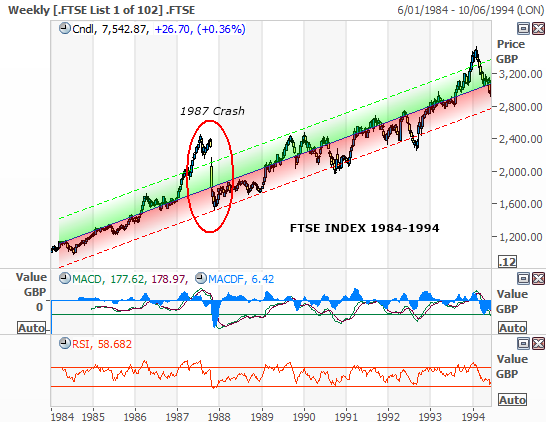 Here is the same chart for the All Ords – it rose…hold onto your seats…110.8% in the year ahead of the Crash and then fell 50%. 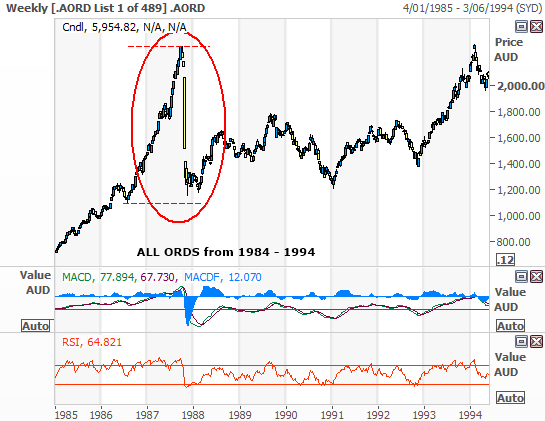 In the end the waterfall is not caused by the first drop that falls, it’s caused by the build up of water at altitude beforehand. As the market rises its vulnerability to negatives increases. The higher it goes the less it will take to reverse it.

In 1987 it took one major US institution deciding to sell and everyone else followed. For a crash to happen you need a lot of stock at altitude (the main ingredient) followed by a strong lead, someone simply selling, someone trying to get as much done as they can before anyone else notices. No-one shouts “The King has no clothes”, not in the stockmarket. They don’t shout it. They don’t even whisper it. They just act on it. How do you spot that? Through price action. By the time the fundamental research is declaring it and by the time they are talking about it on CNBC, its too late.

The most interesting bit for me in hindsight, something we should all learn from the crash, was that the US market had fallen 10.2% in the three days before the crash. On the fourth day it dropped 22.6%. That taught me something that I hope will save you a fortune come the next crash. If everything is going fabulously and the US market falls 3% in a day, sell half of everything. If it falls another 3% the next day, sell the rest. Just saying.

A less onerous way to sell the market – Instead of having to make an unmakeable decision to sell everything what you can do is manage each stock individually as if it’s a separate battle. Do that and by the time you hear about a market correction on CNBC you will have sold on a stock by stock basis without ever having to make a ‘market’ call on all your stocks in one go, something that very few people are capable of. No-one can make a decision on all stocks at once which makes the “Market Call” a bit of a wasted debate. Handling it in bits, stock by stock, is much easier on the heart muscle.