Global growth slowing, plunging bond yields & inverted yield curves… not terminal but shares are due a pull back

The past week has seen a renewed intensification of concerns about global growth. Bond yields have plunged and associated growth worries have weighed on share markets. This note looks at the global growth outlook, why shares are vulnerable to a pullback and why it’s unlikely to be a resumption of last year’s downtrend.

But first some perspective. At their lows back in December global shares had fallen 18% from their highs with US shares down 20% and Australian shares down 14% and many were convinced that recession was around the corner. Since then share markets have staged an impressive rebound with global shares rising 18%, US shares up 21% and Australian shares up 14%. So the 2% or so fall in shares seen in the past few days is a bit of a non-event. 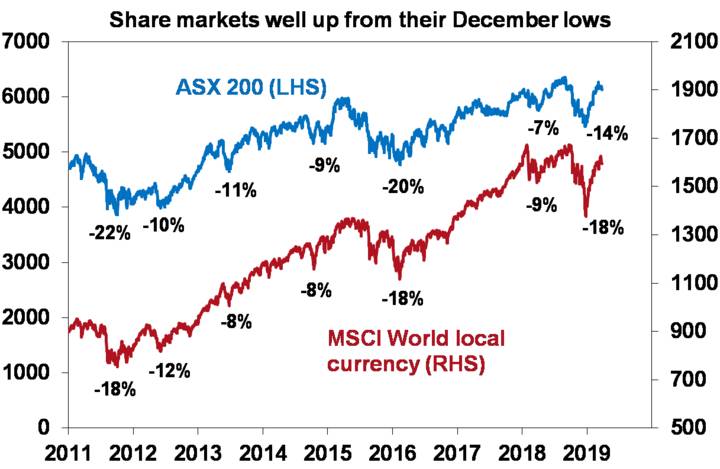 Late last year investor sentiment had become very negative and since then many of the fears that had depressed shares have faded: the Fed has become more dovish and less threatening to the US growth outlook; other central banks have actually eased notably in China and Europe; the Chinese authorities have shifted from cutting debt to stimulating growth; the US partial government shutdown has ended; the US and China look to be heading towards a trade deal; and fears around recession faded. And so shares rebounded.

However, after a 20% plunge as seen in US shares last year it’s unusual to have a deep V rebound like that since December, shares had become technically overbought & some measures of investor sentiment have become complacent. More fundamentally, there are several “worries” that could impact share markets – notably around growth. And this is being reflected in plunging bond yields & an inverted US yield curve. This has all left shares vulnerable to a short term pull back.

The problem now is that while some of the worries from last year have faded, global growth looks to be continuing to slow. Particularly disappointing in this regard were March business conditions PMIs which showed falls in the US and Europe and continuing weakness in Japan (and Australia). 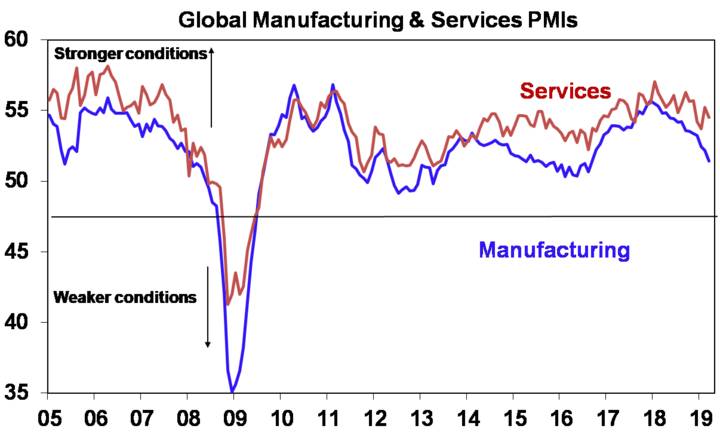 The weakness in growth indicators along with the “great retreat” back to dovishness and monetary easing by central banks aided by falling inflation has seen a renewed plunge in bond yields. 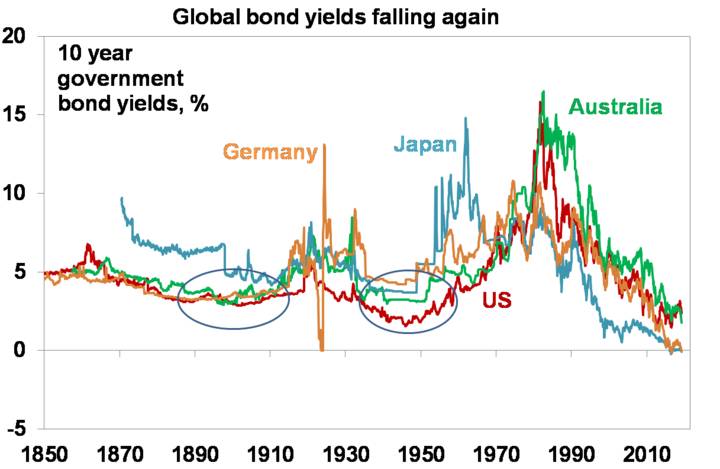 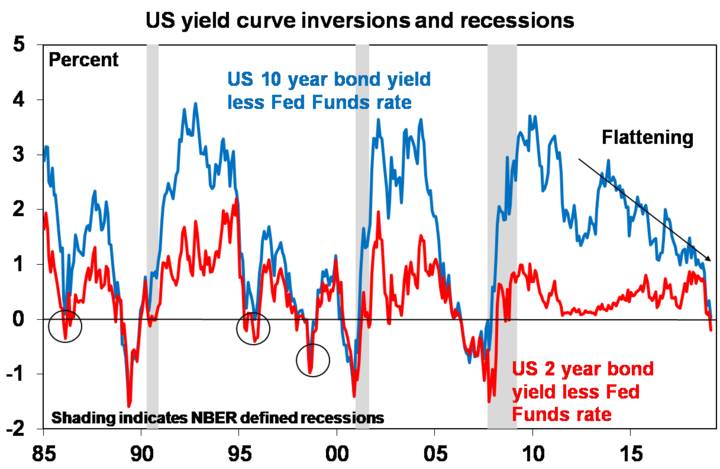 But there are several things to allow for before getting sucked into the current frenzy around an inverted yield curve. First, the yield curve can give false signals (circled on the chart).

Second, the lag from an inverted curve to a recession has been around 15 months. So even if it becomes decisively inverted now recession may not come till mid next year. Historically the share market has peaked 3-6 months before recessions, so it’s too far away for markets to anticipate. After US yield curve inversions in 1989, 1998 and 2006 US shares first rallied more than 20%.

Third, various factors may be flattening the US yield curve which may not be indicative of an approaching US recession including the Fed’s new-found dovishness, negative German and Japanese bond yields holding down US yields, the realisation that central banks won’t be dumping their bond holdings and high investor demand for bonds post the GFC as they have proven to be a good diversifier – rallying every time shares have a major fall.

Fourth, other indicators suggest that US monetary policy is far from tight – the real Fed Fund rate is barely positive, and the nominal Fed Funds rate is well below nominal GDP growth and both are far from levels that have preceded US recessions.

Finally, we are yet to see the sort of excesses that precede US recessions: wages growth is still moderate, inflation is benign, there has been no boom in consumer spending, investment or housing construction, and private debt growth overall has been modest. It may also be argued that President Trump will do whatever he can to avoid recession next year as US presidents don’t get re-elected when unemployment is rising.

So while the US yield curve may be flashing a warning sign and should be watched its short comings need to be allowed for and other indicators are not foreshadowing a US recession. This is important because the historical experience tells us that what happens in the US is critical to how deep share market falls get. Deep (“grizzly”) bear markets are invariably associated with US recession. Our view remains that US recession is not imminent and last year’s share market falls are unlikely to be the start of a deep bear market.

More broadly, global growth is likely to pick up into the second half reflecting policy stimulus & reduced trade war fears. Signs of green shoots in terms of global growth include Chinese credit and investment, US data for retail sales, capital goods orders and consumer confidence and Eurozone industrial production.

But what about the risks around global trade, Brexit and the Mueller inquiry?

These could cause a share market pullback but none look significant enough to cause a resumption of last year’s falls:

What about Australian bond yields at a record low?

The plunge in Australian bond yields to a record low of 1.78% (below 2016’s low of 1.81%) reflects a combination of weak economic data locally causing the fixed interest market to price in RBA rate cuts and falling bond yields globally. We remain of the view that Australian bonds will outperform global bonds (reflecting RBA easing at a time of the Fed holding) and that the Australian share market will continue to underperform global shares (as earnings growth locally lags that globally in response to weaker economic conditions in Australia). We continue to see the RBA cutting rates twice this year.

Share markets are due a correction or pullback after rallying strongly since their December lows and worries about inverted yields curves and the growth outlook could provide the trigger. But US and global recession still looks to be a fair way off and we continue to see this being a reasonably good year for shares. The continuing fall in bond yields is not necessarily inconsistent with rising share markets (in 2016 shares bottomed in February and bond yields didn’t bottom till July/August!) but it does highlight that the post GFC environment of constrained growth and inflation and low rates remains alive and well.