What the house price boom means for AREIT investors

Few would have predicted it a year ago but house prices are booming again.

Twelve months back, coming off the longest housing boom in Australian history, residential markets were facing tightening credit conditions and slow wages growth. As a result, there was great uncertainty about the direction of house prices.

Then, a few weeks after the first local case of COVID-19, international borders were shut and lockdown restrictions imposed. Record population growth ground to a halt and the housing market went into hibernation. Investor sentiment quickly turned south.

This was an understandable position. With fewer students and travellers, universities closed their doors and short-stay tourism dried up. With people confined to their homes, shopping centres and offices emptied. Inner-city apartments were the main casualty, particularly in immigration-dependent cities. House prices in Sydney fell by 3%, in Melbourne by over 5% with other cities showing weakness.

That, some commentators believed, was one the start. Some warned that house prices could decline by as much as 30%.

Almost inconceivably, house prices are currently growing at their fastest monthly rate since the late 1980s. That pace may quicken. According to Macquarie, we may see a trough-to-peak rise in Australian dwelling prices of around 20% by the end of 2022. As the chart below shows, capital city dwelling prices are already approaching pre-COVID peak levels. 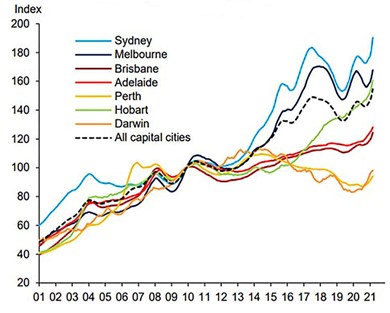 The reversal couldn’t be more striking or sudden. The housing boom is back and AREIT investors might be wondering how it affects them. Before addressing this issue, we need to examine the reasons for the rebound.

The first is that credit has been easy to come by. Interest rates are at historically low levels and the RBA believes they are unlikely to rise until at least 2024. As the chart below shows, between 2014 and 2021, mortgage rates have been slashed to less than 2%. 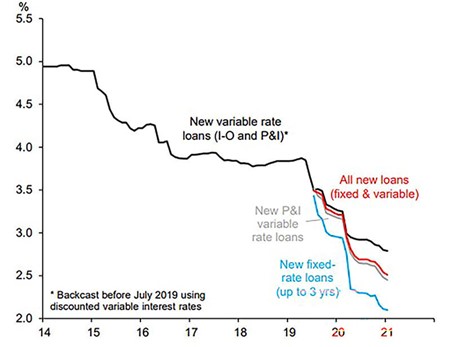 Third, a range of government policies, designed to arrest the decline in property prices and keep the economy ticking over, have had a similar impact.

More than 75,000 Australians took advantage of the lucrative government incentives to build and renovate their homes. Through the HomeBuilder programme, first homeowner grants and stamp duty concessions, deposits were bolstered. Along with the lowering of loan-to-valuation ratios, the result was that buyer capacity and demand for housing increased significantly.

What does this mean for AREIT investors?

This means that the recent strength in Australian house prices should translate into increased construction activity and consumer spending. The chart below shows Goldman’s estimate of how Australia’s housing market is likely to add between 0.5% and 1% to annual GDP growth over the next few years. 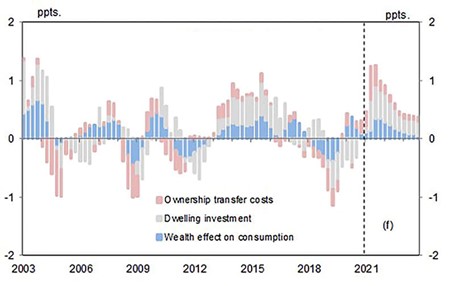 Naturally, a portion of this additional spending will end up in the pockets of commercial property owners and their investors.

Figures from the Australian Bureau of Statistics suggest this may already be occurring. Retail turnover jumped 10.6% compared to January 2020. For an example of the impact on commercial property, one need not look any further than large format retail REIT, Aventus. It reported 44 million visitors over the year, up 8%, and delivered $56 million in earnings for the six months to December, up 6.5%.

Over the medium term, the Australian retail sector should continue to perform strongly, supported by lower interest rates and the embedded wealth effect from increasing residential prices.

Exposure to the residential sector in the APN AREIT Fund is achieved through Stockland and Mirvac, both of which have significant residential development capabilities delivering strong price and margin growth.

Stockland recently achieved its highest level of land sales in four years and management expects further price growth across most of its markets over the next 12 months. With net sales up 33% half-on-half, Mirvac also benefited from the residential stimulus, largely driven by master-planned community (MPC) sales.

Closely aligned sectors such as storage have also benefited. Both Abacus and National Storage reported higher occupancy rates from increased housing turnover and the migration of people interstate. In its latest result, Abacus even reported 29% growth in self-storage net property rental income.

These beneficial impacts are occurring even before the economy fully opens up, international travel resumes and international trade resolves its supply issues. The tailwinds of further global economic recovery and the resumption of immigration will see residential property as a favoured investment destination for some time. The trends already evident are therefore only likely to strengthen.

For AREIT investors, the longer-term case for investing in high-quality residential developers and REITs is a powerful one. We expect it to be one of the key drivers helping to deliver a regular, attractive income stream to our investors for many years to come.