A super storm is brewing over how young people might be using their super that they can access up to $10,000 this year and then $10,000 next year because of the problems caused by the Coronavirus and the Government’s lockdown measures to beat it. 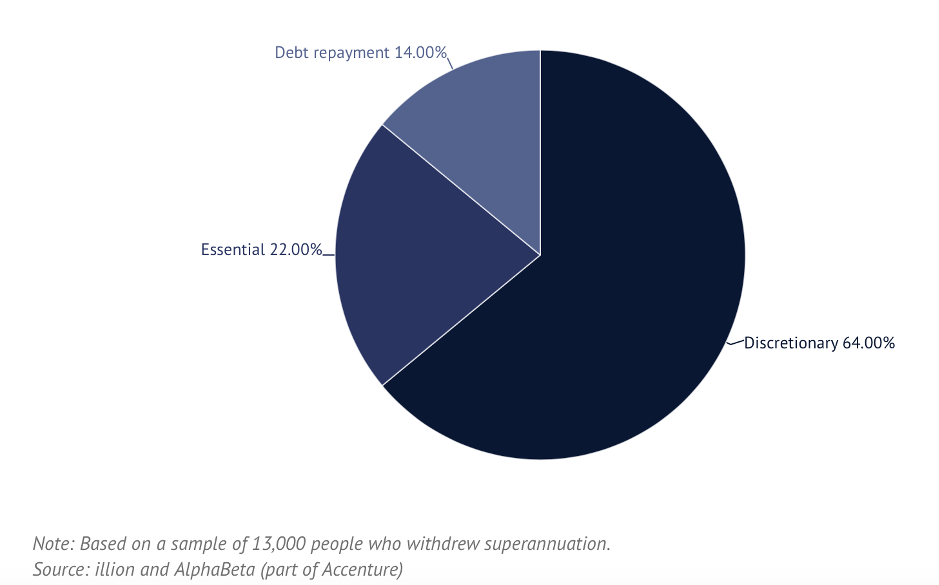 Work done by consultancies Ilion and Alphabeta has revealed a lot of super-withdrawers have not used the money for worthwhile purposes. This pie chart tells the story pretty simply.

Clearly, debt repayment was a good use of super monies. And those who bought essentials could hardly be criticized as it would reflect their difficult circumstances, thanks to this damn COVID-19 challenge.

However, the discretionary spending category probably masks a whole lot of wasteful spending that could really come back to bite young people as the years tick by.

Andrew Charlton, a hotshot economist who came to light as a young man who was recruited to advise Prime Minister Kevin Rudd. He’s controversial but smart. He’s a director of AlphaBeta and, along with credit monitoring outfit Ilion, has broken down where the money has gone from a sample of 13,000 spenders. This chart doesn’t tell a great story. 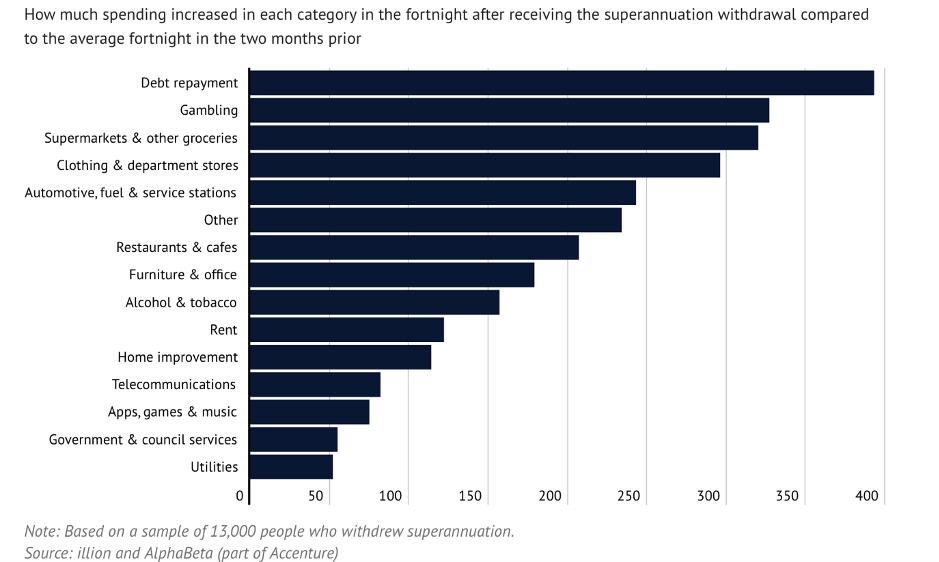 Those who used their super for gambling, cafes, alcohol, smokes, clothing, games etc. might rue the day they drew their super out for having a good time.

A few weeks ago I suggested some smart young people might draw out their $20,000 and use it to get into property, as real estate prices are bound to fall. I have to say I did receive a tweet (with a number of “likes”) that said: “Dude, I’m using my super for booze and a good time!!!”

However, that ‘dude’ probably doesn’t know that his decision could cost him over a half-a-million dollars. Let me show you why.

Boring money types like me use a neat little equation to work out how money grows over time. I use it at dinner parties when the conversation gets boring, which shows you how interesting my group of friends are!

Even if we adjust for inflation, the super-waster gives up about $300,000 of spending power when he eventually retires at 70. Of course, he might not be able to retire at 70 because his super balance might not be good enough because of his silly decision in 2020 — the year of the Coronavirus crash.

Anyone who has already accessed their first $10,000 of super might think twice about going in for the second round dip after June 30. If you’re 25 years of age and you refrain from taking more out, you could save yourself $320,000 that could be fairly useful when you retire.

And if you think that’s a long way off, well just think about the number of times you’ve heard someone say: “Doesn’t time fly?”