For the past four decades a key feature of investment markets has been a super cycle bull market in bonds that saw 10-year bond yields fall from around 16% to lows last year around zero (and well below in some countries). This multi decade decline helped propel a global “search for yield” by investors that has pushed down yields and pushed up prices of most other assets. Underpinning it has been a collapse in inflation globally. While there have been numerous premature calls over the years that the super cycle bull market in bonds is over (including some from me) its looking increasingly likely that this time for a bunch of economic and political reasons it may actually be over. This note looks at why and what it may mean for investors.

But first a bit of context in terms of how bonds work. They can be a bit confusing but my high school economics teacher belaboured the point that yields move inversely to price and so it’s always stuck with me. If the government issues a bond (which is basically a fixed amount of debt with a fixed interest payment) for $100 and agrees to pay $3 a year in interest, this means an initial yield of 3%. The higher the yield the better, but in the short term the value of the bond will move inversely to the yield. If growth and/or inflation slows and the central bank cuts interest rates, investors might snap up the bonds paying $3 till the yield is pushed down to say 2%. In the process, the value of the bond goes up giving a capital gain. This is what’s happened in recent decades. But if growth or inflation pick up and bond yields rise, investors suffer a capital loss. This is what’s happened over the last 12 months with Australian bonds losing 1.5% over the year to September and global bonds losing 0.8%. Of course, if you buy a 10-year bond yielding 16% and hold it till it matures (10 years) the return will be 16% p.a. But if the starting yield is just say, 1.8% that’s all you will get for 10 years.

A bit of history on super cycles in bonds

Over the last 80 years there’s been two big secular or long term moves in bond yields – up for around 40 years and then down. The next chart shows US and Australian bond yields from 1860. 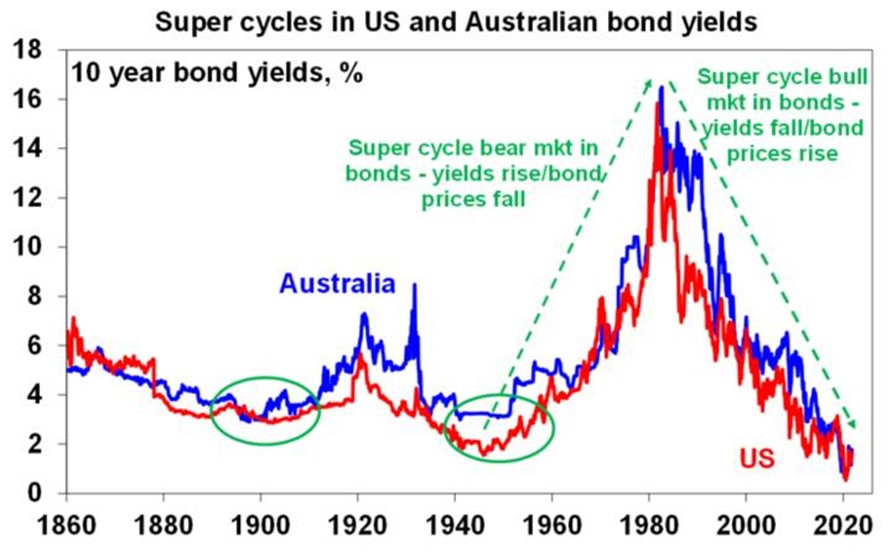 Bond yields on the rise

After their lows last year bond yields surged into early this year only to pull back again but they bottomed a few months ago well above last year’s lows and are threatening to rise above the levels seen early this year. See the next chart. The resumption of the rise in bond yields reflects a decline a new coronavirus cases globally leading to renewed optimism that reopening globally will be sustained, the continuing rise in global inflation readings not helped by the surge in energy prices and more central banks starting to remove stimulus. 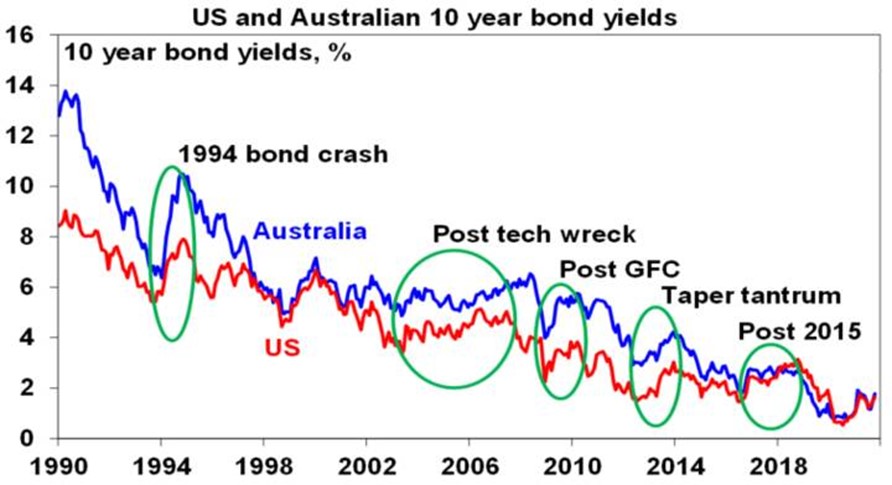 Of course, cyclical upswings in bond yields in economic recoveries are normal and no reason for alarm. Particularly if they are gradual and offset by higher earnings in the case of shares. And the long-term bond bull market since the early 1980s has seen several upswings in yields (see the green circled areas in the last chart) only to see the declining trend resume. So, the same could happen this time.

The end of the super cycle bull market in bonds

However, there are good reasons to believe that that long term super cycle decline in bond yields is over and that the trend is shifting to the upside for bond yields:

Much of the current surge in inflation globally can be tied to the pandemic which has disrupted production and boosted demand for goods resulting in supply shortages – which should subside with reopening. However, beyond the next 12 months or so the first six points are consistent with the view that the long-term decline in inflation since the 1970s is likely over, with the risk that it will trend higher over the decade ahead. And the trend in inflation is a key driver of the trend in bond yields.

But bond yields will likely trend up gradually

While we may have seen the end of the super cycle decline in bond yields, the shift to a rising trend will likely be gradual with periodic spikes and then setbacks as we have seen this year:

There are several implications. First, expect mediocre returns from sovereign bonds. 10-year bond yields of 1.8% in Australia imply bond returns over the next decade of just 1.8%! And at times, rising bond yields will mean capital loses.

Thirdly, the rise in bond yields will favour share market sectors that can benefit from economic recovery via higher earnings – like industrials, banks and resources stocks.

Fourth, for shares and real assets like commercial property and infrastructure, a rising trend in bond yields will reduce the tailwind they have seen from investors buying them for yield & enabling them to trade on higher PE multiples and lower yields.

Finally, rising bond yields are pushing up fixed mortgage rates again in Australia and this along with poor affordability and higher required debt interest rate buffers will drive a further slowing in residential property price gains into next year.