Overall, a “better than feared” reporting season helped drive the S&P/ASX 200 Accumulation Index to gains of 6.0% during the month of February. This was despite earnings downgrades of ~2% across ASX200 companies.

The counterintuitive outcome suggested investors’ expectations were reasonably bearish heading into the reporting season. Much of the concern came as the result of several companies pre-releasing results during January, with the majority providing negative updates. Against these expectations, results were broadly positive. However, as always there were hits and misses aplenty, many of which were met with explosive price moves.

The key trends we identified during the recent reporting season include:

Capital management remained front and centre this reporting season with many companies opting to return capital to investors. Companies with excess franking credits were the standouts, with several of these companies distributing or planning to distribute these credits to shareholders ahead of the upcoming Federal election.

The chart below indicates just how significant the increase in special dividends was for the ASX200 this reporting season. 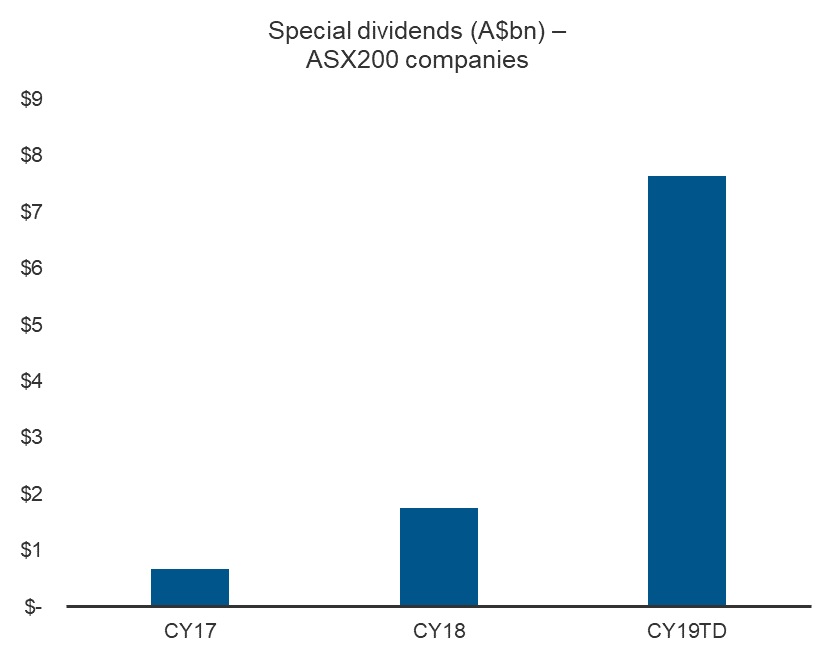 The Big Four banks enjoyed a relief rally following the release of the banking Royal Commission’s final report in early February. However the subsequent earnings results from regional banks Bendigo and Adelaide (BEN, -8.5%) and Bank of Queensland (BOQ, -11.4%) highlighted that operating conditions remain challenging. Banks continue to face revenue headwinds from lower credit growth, and margin headwinds from higher regulatory and remediation costs. Additionally, with bad debts close to cyclical lows, earnings growth is likely to be modest at best.

A key focus for investors during February was the assessment of increasing headwinds on consumer facing businesses, such as discretionary retailers. Weaker house prices, particularly in Sydney and Melbourne, were generally expected to weigh on consumer spending, due to the negative “wealth effect”. Additionally, the looming NSW State government election (March) and Federal government election (May), were also expected to create some uncertainty.

Despite these headwinds, company commentary was generally more upbeat than market expectations. This may be explained by the ongoing strength in employment, which combined with low interest rates, continues to support consumer activity for now.

Although reporting season was generally better than expected, consensus earnings forecasts for FY19 were further reduced. Earnings per share (EPS) growth remains positive for the ASX200 index, but remains supported by the Resources sector, which is benefiting from higher commodity price forecasts. Outside of Resources, FY19 market forecasts have been downgraded, consistent with prior year trends. Additionally, with several companies guiding to a better second half, downside risk remains. The chart below shows the continued downward direction for the FY19 earnings forecasts for the broad ASX 200 universe. 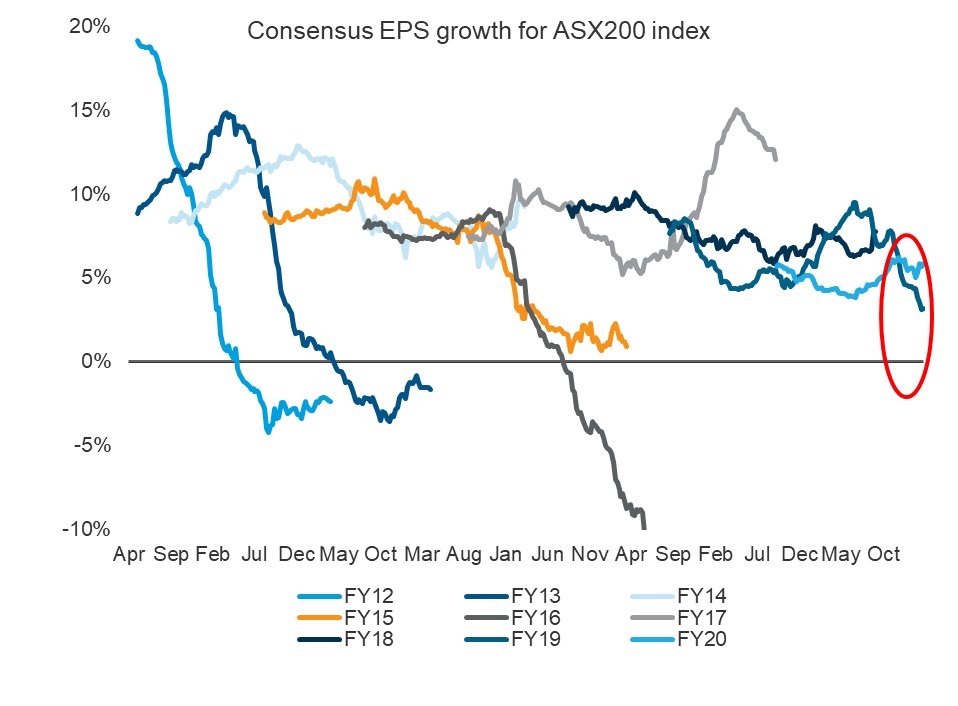 The key themes of the February reporting season are not new to the Australian market, however we are aware that they are front of mind with investors. We continue to monitor these closely as part of our investment process. Their evolution over the coming months will be critical for the performance of stocks, sectors and factors exposures.

We believe that domestic economic conditions remain broadly supportive and the Australian equity market continues to offer opportunities for investors, noting an increasing divergence in valuation between segments of the market.