How to read Financial News 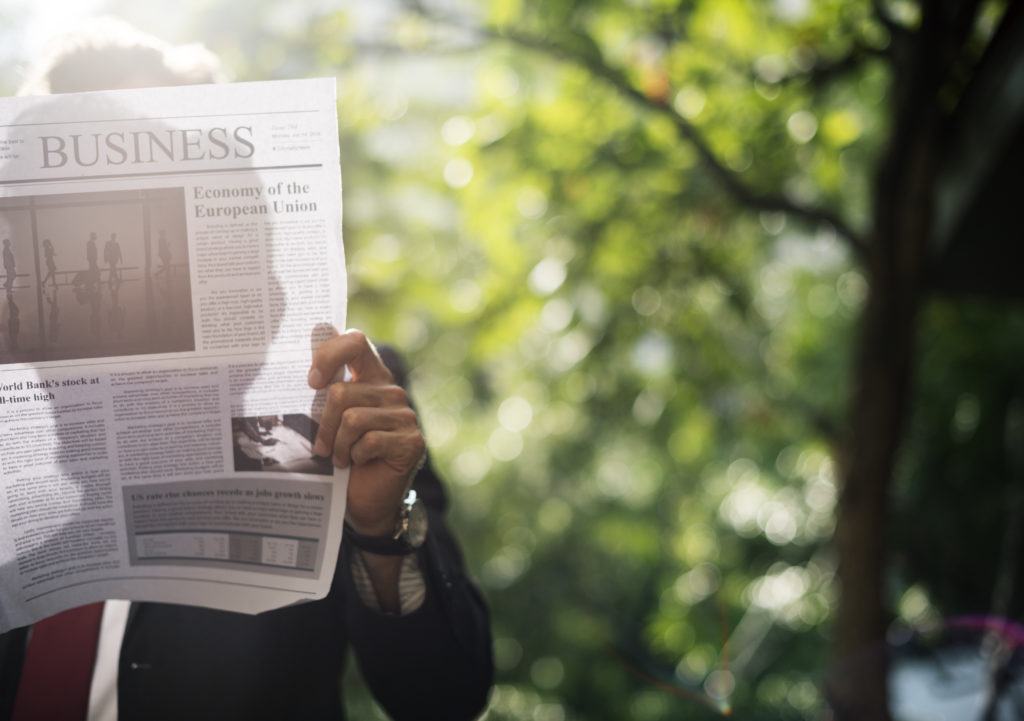 It’s the day before the Great Depression begins. One of the most important days in market history.

Let’s go back in a time. What would you find?

Dig through the New York Times that day, and the entirety of stock market coverage is summarized on one page, a third of which is a Chanel shoe ad. 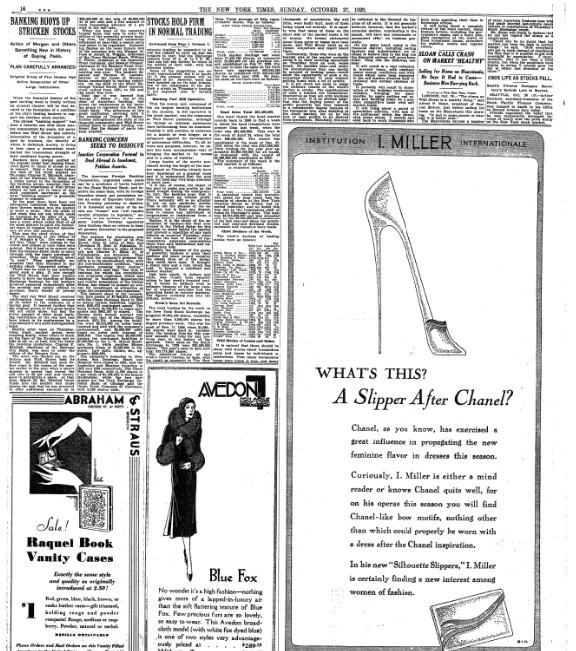 The difference in how much – and what kind of – financial information existed then vs. today is astronomical. And we don’t have to go back to 1929 to find a similar world. Twenty-five years ago the papers – and how most investors accessed market information – weren’t much different than they were in 1929. Or 1879.

The advent of financial news TV mastered the art of saying a tremendous amount of something when nothing needs to be said. Blogs, Twitter, and podcasts have taken it to a new level.

Here are a few things that help me make sense of the amount of content we have today.

Bucket everything that catches your attention into a category of relevance. There’s a hierarchy of news and information that looks something like this: 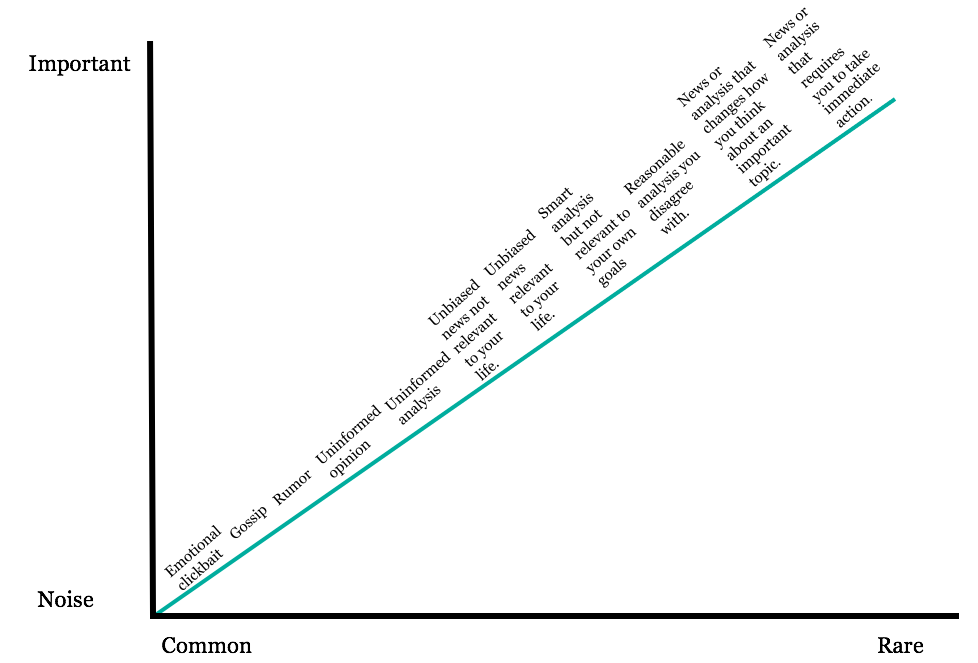 The takeaway here is that good, relevant content is extremely rare. You should have no tolerance for the lower half of categories in this chart, and asking yourself where something fits before reading it is vital. Giving yourself permission to move on quickly provides more time to find something relevant.

Read stuff you disagree with, written by people you respect. Charlie Munger says a prerequisite to having an opinion is stating the opposing side’s view as well as they can.

Modern financial media makes that hard, because no matter what you believe you can find a well-designed blog that agrees with you, and confirmation is more comfortable than opposition.

Reading stuff you disagree with is not natural. You have to force yourself into it. But even that’s not good enough, because the most attractive opposing views are written by idiots, amateurs, quacks, and salesmen. They’re the easiest to shoot down, allowing yourself to say, “Ah-ha, the other side is wrong and therefore I am right.”

You have to seek out opposing views from people whose thought process you respect. That probably means people who you agree with on other topics. If you can say, “I know you’re reasonable, because you and I agree on X. So why do we disagree on Y?” … boom! You’re a step closer to reasonably figuring out the opposing view. Figuring out how the world works. Which is what we’re all trying to do.

Read more than pure finance. Investor Patrick O’Shaughnessy has a book club. An email he sent to his readers a few years ago began: “Consistent with my belief that it is more productive to read around one’s field than in one’s field, there are no investing books on this list.”

This is so smart. Investing is not the study of finance. It’s the study of how humans behave with money. When you realize it’s the study of human behavior, you see that it incorporates the lessons and laws from all kinds of different fields. Psychology. Sociology. Statistics. Biology. History. Politics. Rule of thumb: If it looks into how people behave in groups and respond to incentives, it’ll teach you something about investing.

My friend Nick Maggiulli wrote an article this week that begins: “It had been nine days since Volkert Evertszoon and his fellow shipmates had consumed anything other than their own urine.” He uses that story to frame a discussion around investment risk and valuation.

This kind of stuff is not only more entertaining than pure finance; it gets you closer to understanding how people behave in the real world, which is what finance is all about.

Old news is the best guide of how to treat current news. Old news is amazing. It is the most unfiltered historian, offering a view of the world that suffers from no historian’s subjective editing of what’s important.

The historian of old news teaches a few things: That forecasting markets and economies is nearly impossible; that people will never stop believing in forecasts; and that the biggest news stories in hindsight are the ones no one was talking about with foresight. It’s an important framework to remember when reading today’s news.

Old news also shows that most of what seemed like important news at the time was quickly forgotten. Take this August 2011 headline: “Dow falls 512 in steepest decline since ‘08 crisis.” That was a big deal at a the time. But how many people still care about it today? Few, if any.

Every piece of financial news you read should be filtered by asking the question, “Will I still care about this in a year? Five years? Ten years?” The goal of information should be to help you make better decisions between now and the end of your ultimate goals. Read old news and you’ll quickly see that the life expectancy of your goals is higher than that of the vast majority of headlines.

Understand that people play different games. A long-term investor sees a headline about selling stocks before earnings and shakes his head in disbelief. A trader reads an article about Stocks for the Long Run and thinks people are oblivious. Momentum investors think they’re both missing it. Bond investors think all three are crazy.

It’s fine. There are all kinds of ways to invest. What’s important, as a reader, is that you don’t take your cues from someone writing about a different game. A perspective can be highly relevant to one person and irrelevant to another if those people have different time horizons or different goals. When you find yourself disagreeing with something, ask whether you’re actually just playing a different game than the person who wrote it.

The best kind of content is empathetic to this disconnect. It pushes readers in a general direction while leaving all actions up to the readers themselves. This is rare, especially in formal journalism. I worked with editors in the past who would basically say, “I like this article, but it doesn’t tell readers what button to push in their ETrade account.” Drove me crazy.

As a writer, you add the most value acknowledging that you don’t know your reader. As a reader, you gain the most by remembering that the writer has no idea who you are.