Why funds should look at where their members live

Retirement may be a journey rather than a destination, but the cost of the ticket varies widely depending on where older Australians live.

Where the median 65-69-year-old retiree lives can affect their annual spend by more than $10,000 a year according to the latest Milliman Retirement Expectations and Spending Profiles report.

It has significant implications for funds, particularly those with regionally focused memberships, which will affect engagement strategies, portfolio construction and financial planning advice.

The data, which analysed the real-world spending patterns of 300,000-plus retirees, shows that Canberra residents have the highest annual spend of any region in Australia at $38,923 while Tasmanian metro residents spend the least at $28,816. The median spend across Australia was $31,068.

These differences reflect a general trend: retired Australians living in capital cities spend far more than those in regional Australia. Several factors could be driving this, including higher costs of living and higher incomes leading to larger retirement savings that support better lifestyles. 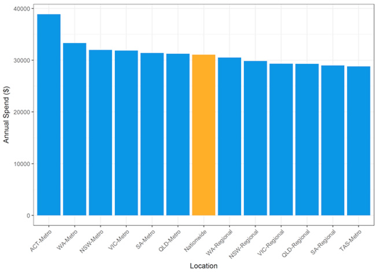 There are also valuable insights into what retirees are spending their money on.

The data reveals that retirees living in regional areas spend significantly less on health than the national average. It also shows that Canberra retirees spend the most on leisure and travel while Sydney retirees spend more on insurance than retirees who live elsewhere.

These expenditure variations create significant differences in target super balances. To fund the median annual expenditure of $31,068 throughout retirement with 75% certainty would require a balance of $129,621, assuming an investment in a balanced fund.

This is not a simplistic target: it is based on stochastic modelling assessing thousands of scenarios incorporating the interactions of asset returns and inflation, spending drawdowns and the Government Age Pension.

A Canberra resident would need a far higher balance, $280,444 at retirement, to fund their greater median annual spend of $38,923 with the same level of confidence. That’s more than twice as much super although the Age Pension would still provide two-thirds of expenditure over the course of retirement.

By contrast, a Tasmanian metro resident would need a super balance of just $91,829 to fund their much lower median annual spend of $28,816. The Age Pension (a maximum of $20,745 a year not including the Energy Supplement) would underpin the bulk of this expenditure (91%) over the course of retirement. 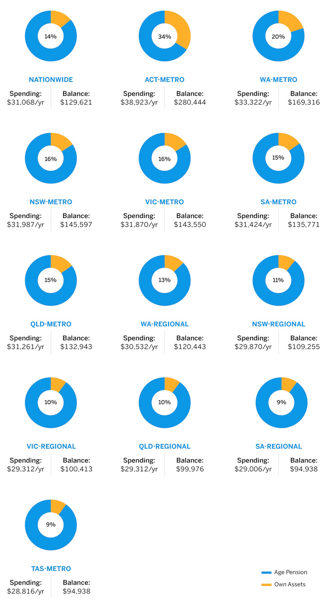 The variation in the super balance required at age 65 is almost $190,000 depending on a retiree’s location.

These findings shouldn’t imply targets but instead point the way towards current member expectations. Australians will need to save more (or less) for retirement depending on where they live and, using current expenditure as a baseline, funds can develop more effective strategies to bolster members’ future retirement incomes.

For example, the bulk of Tasplan’s 165,000-plus members are based in (or originally from) Tasmania. The $7.6 billion fund should use a different retirement income target than the Public Sector Superannuation accumulation plan (PSSap), which has a significant proportion of Canberra-based members.

The actual mix of strategies they choose will require a deep analysis of each fund’s membership characteristics, leading to potentially different risk and return settings for default investment portfolios.

The maximum Age Pension payments for a single homeowner is $888.30 and for couples $669.60 each per fortnight.

A deeper analysis shows that where members live plays a huge role and should form part of the retirement discussion. Superannuation, just like all financial services, needs to tailor its offerings and engagement to its clients’ circumstances.

Working with a Financial Advisor will enable you to tailor your investments to suit your particular needs and work together toward achieving your goals.