From Wall Street to the Oval Office

The 2020 US Presidential Election is shaping up to be one of the most hotly contested races in history, with the US appearing more divided now than when Trump made his entrance into the White House in January 2017. As the polls continue to oscillate, it’s likely that the homestretch will be a nail-biter and a Biden landslide is far from a sure thing.

2020 initially looked to have brought with it a reversal of fortunes for Trump, with the conclusion of the impeachment proceedings regarding the alleged collusion with Russia in the 2016 election firmly in the rear-view mirror, and a healthy lead in the polling.  Likewise, the economy was humming as unemployment had edged down to a 50-year low of 3.5%, and the US-China Phase 1 Trade Deal had just been signed. Given that a healthy stock market typically favours the incumbent in an electoral battle, signs were looking positive for Trump.

The ‘fake news media’ and COVID-19

Trump’s prospects for re-election never looked better, until COVID-19 swung a wrecking ball through the economy, creating significant uncertainty for the US and global economic outlook. Social unrest and Trump’s disappointing management of COVID-19 saw Biden surge ahead in the polls mid-year, suggesting Biden would comfortably dethrone Trump in the 3 November 2020 election. Recent polling, however, suggests this lead is running out of steam and Trump now finds himself back within striking distance of a second term in the Oval Office.

A Biden presidency has been touted as less accommodative for financial markets, although passing any significant legislative agenda would require Democrats wrestling control of the Senate and maintaining a majority within the House of Representatives. Some of the more impactful legislative priorities which have been outlined by Biden to date are summarised below, whilst acknowledging that this is only the proverbial tip of the iceberg.

The S&P 500 Price Return Index (AUD)* has historically performed stronger under the reins of a Democratic president.  However, this analysis is skewed as the ‘Black Monday’ crash of 87’, ‘Tech Wreck’, ‘GFC’ and ‘COVID-19 Recession’ have all occurred during a Republican’s tenure.

The chart below illustrates market movements across the last 46 years. Clearly there are instances where material gyrations can be identified, however a clear upwards trajectory is observed over the long term, regardless of the party affiliation of the incumbent president or whether an election is occurring. 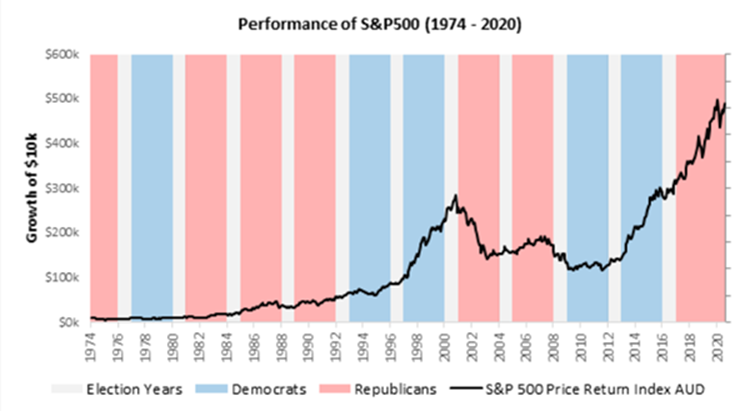 *The ‘Performance of S&P 500 (1974 – 2020)’ analysis was conducted using the S&P 500 Price Return Index (AUD) due to the absence of total return data prior to 1988.  Under ordinary circumstances a total return index would be preferable to better capture the experience of the investor.

Are frothy valuations susceptible to a wash out?

Whilst a Biden win could potentially throw Wall Street a curve ball, proponents of the efficient market hypothesis would argue that this outcome has already been priced into the elevated market valuations. As such, fears over a market melt-down appear overstated should a Biden presidency be realised. However, if the pundits are proven wrong, and Trump delivers a surprise election victory, this would likely pave the way for of a strong year-end market rally.

Regardless of the US election result, our portfolios are not constructed based on idiosyncratic risk drivers.

We build diversified portfolios which aim to offer resilience irrespective of the market conditions. This is achieved through our regional diversification beyond the US, and short positioning which allows segments of the portfolio to profit during periods of adverse market conditions, amongst other portfolio construction tools.

For example, we have exposure to the alternatives sector to capitalise on instances of market volatility and capture uncorrelated return drivers through allocations to managed futures, market neutral and global macro. These components of our portfolios provide differentiated alpha sources whether it be a Biden or Trump victory.

And a reminder that the underlying managers for all components of our portfolios are professional fund managers.  These are fund managers that are highly rated by our Research team which we believe are best placed to traverse the universe of available investment opportunities.

Overall, we believe our portfolios remain suitably prepared for what will no doubt be an acid test for the resilience of stock markets globally over the coming months.